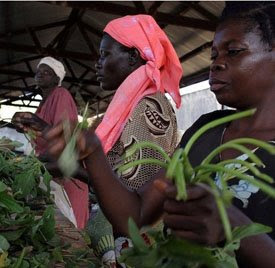 Amid the gathering economic crisis, with the continuing sense that no one seems really to understand what is going on – and no one is in control, this might seem small beer. But it isn't. It tells of EU action which is going to add immeasurably to the sum of human misery, from which none of us will be insulated.

The subject is one we have visited before, most notably here - the EU's new pesticide directive. This particular piece exactly echoes our fears when it declares: "EU's false insecticide fears pose real threat to Africa".

The EU, it says, "banned scores of pesticides this month under the pretence of protecting human health and the environment." You might assume, it continues:

…that the EU could demonstrate some threat to humans or the environment, that it had found viable alternatives to the banned pesticides and that it had assessed the consequences of this ban to farming, to food prices and to the poor whose only defence against disease is pesticides. But you would be wrong on all counts. The new regulations not only damage food production in the EU but also threaten public health in distant countries — mainly poor countries in Africa.

The writer of the piece is Jasson Urbach, an economist in the Health Policy Unit of South Africa's Free Market Foundation think-tank, based in Durban, South Africa. He is also a director of "Africa Fighting Malaria". He goes on to write at some length of the specific problems faced by Africa from this EU move, stating baldly: "The new EU regulations compound the woes of the poor who suffer most."

When it comes to our own affairs, enlightened self-interest should come to the fore. Many times we have discussed the effects of poverty in the developing world as the driver for migration. This dire piece of legislation can only add to the pressures. Many of those migrants will end up in the EU and, either directly or indirectly, on our shores.

Then, as global trade collapses, an important part of our salvation package is, as it has always been, measures to increase the wealth of the global community – so that they can afford to buy our goods and services, the real wealth that drives what is left of our economy. In this way too, the this dire law will affect us all.

The trouble is that the linkage is not obvious. The effects are secondary and it is the effects which will be reported, not their cause. And there are many more such effects, many of them stemming from misguided legislation which emanates from Brussels. Jasson Urbach does us a service, pointing out one area of linkage. Tragically, he will be ignored.

He writes with a sense of optimism, noting that, although EU decision-making is opaque and usually unaccountable, "public pressure has brought this into the open, giving African governments, NGOs and charities a chance to speak up for the poor in all the capitals of EU member states."

Furthermore, he notes that UK Environment Secretary Hilary Benn has said: "The UK does not support these proposals". Thus, what is usually a simple rubber-stamp could meet late resistance from the UK and other governments, whose farmers and consumers have forced them to face the threat.

We are truly stacking up trouble and, in the welter of bad news from other sources, the biggest trouble of all is that we have neither the means nor the political will to tackle his problem head-on. However, it is not going to go away. Trouble never does.