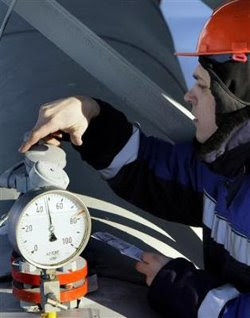 … is going on here. A little while ago, things seemed on the mend between Russia and the EU, with a deal stitched up that would have EU monitors on station on the gas pipelines to ensure everyone was playing by the book.

No sooner was the deal on, then it was off again, and then it was back on. Then, when the monitors were in place, the gas was supposed to flow, which it did – only it didn't. Actually, it did flow, but didn't arrive where it was supposed to.

Hmmmm ... Russian engineering may be inefficient, but it is not that inefficient.

Reuters is doing its best to explain what is going on politically, noting that, as "Russia and Ukraine faced another day of sparring over gas supplies" two EU member states - Bulgaria and Slovakia - have broken ranks and are attempting to make their own deals.

The Russian state-controlled gas monopoly Gazprom has now declared force majeure on gas exports to Europe, to insulate it from its contractural agreements, claiming there are "circumstances beyond its control" which are preventing it from meeting its obligations to clients. But Ukraine, straddling the route to European countries, has said that these "circumstances" are simply that the pressure of gas from Russia is "too low."

Now, these fun and games are all very entertaining, but they don't explain anything. The EU member states desperately need the gas, and they are paying top dollar for it. Russia, on the other hand, very much needs the money. And, with the EU monitors in place, there should be no barrier to delivery.

Ukraine is, of course, a "joker" in the pack, but it is somehow not credible that Russia would go to all these lengths to sabotage its neighbour, when the cost to itself is so high. Somehow, the idea that Russia simply does not have the gas to sell is beginning to look more credible, an idea which we looked at here.

If that is the reason for this situation, or even part of the reason, then it will have interesting implications for the EU. Energy shortages will continue to build up and, with Bulgaria and Slovakia already breaking ranks, we can expect to see even more member states seeking to do their own deals. That puts the EU in deep schtuck.

That may explain another thing. Although the Middle East is a preoccupation of the "colleagues", by comparison with 2006, their voice on this current crisis has been muted and there is by no means the same degree of frenetic activity. On the other hand, by far the bulk of EU diplomatic activity – and press statements – has related to the gas crisis.

Gut feeling it may be, but the signs are there that this "gas crisis" is far more serious than it appears – serious though it has appeared – and that the "colleagues" are very worried indeed. That may be good, but it could be bad. Worried "colleagues" might be dangerous.