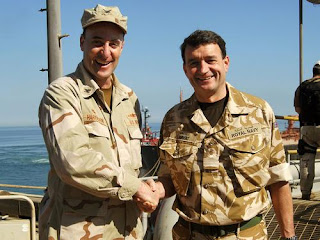 It was a simple enough mistake to make. After all, it was the BBC in one of its first reports after the Iranian hostage-taking which referred to Commodore Nick Lambert as the captain of HMS Cornwall, the frigate on which the abducted boarding team had been based.

We fell in with the BBC – and many others – although we should have known better – the rank of Commodore is far too senior to command a mere frigate. Her captain is in fact Commander Jeremy Woods, who took command on 20th November 2006.

The distinction is, of course, rather important in the drama of the abduction because Commodore Lambert was using the ship as his flag ship, it providing him with a "command platform" from which he controlled the multinational task force in this area, of which he was the commanding officer.

Lambert assumed command on 7 March 2007 of what is known as Coalition Task Force 158 (CTF 158), a coalition force comprising up to 12 units from the US, UK, Australian and Iraqi navies, taking over from US Navy Commodore Jeffrey Harbeson (both pictured above). 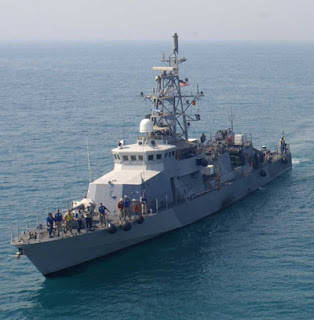 The US patrol craft (PC) are particularly interesting, of which USS Chinook is a typical example (pictured right). It is the ninth of the Cyclone-class patrol coastal boats: length, 170 feet, displacement 331 tons and – all importantly – a draught of 7.5 feet (compared with the Cornwall's 20.7 feet). She has a maximum speed of 35 knots and is armed with two 25mm Mk38 machine guns, two .50 cal machine guns, two Mk19 automatic grenade launchers and six stinger missiles. 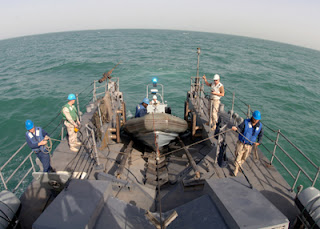 She also carries a rigid-hulled inflatable boat, launched and recovered from a stern ramp (pictured left) and a complement of eight special forces personnel to man it.

This, as you may imagine, puts an entirely different light on the additional detail that emerged yesterday, when the Scotsman on Sunday reported that the Cornwall's boarding crew "had even more protection nearby; an American military helicopter and patrol boat were within striking distance, ready - and willing - to help…". 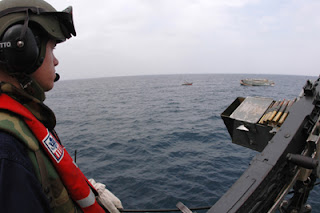 Rather than wait until after the event, Lambert, had he so chosen, could have tasked any one of twelve vessels - including the USS Chinook or one of the other patrol boats – to carry out the freighter inspection, instead of despatching Cornwall's boats, from a distance of eight miles. Equally, he could have asked – no, ordered - any one of those vessels, to provide overwatch – and, clearly, the US Navy knows how to do it, as this illustration of one of its own boarding exercises shows, the gunner keeping a "sharp eye out" for the inflatable (centre frame).

Furthermore, it is not as if Lambert can have been unaware of an Iranian threat. Thanks to one of our sharp-eyed readers, we have picked up this report from CNN, dated 19 February this year, recording multiple incursions by Iranian patrol boats into Iraqi waters.

Crucially, they had been filmed operating near the Iraqi offshore oil terminals, Khor Al Abdullah (Amaya) and Mina Al Bakr, which are close to the position recorded for HMS Cornwall on 23 March when its boarding party was abducted by Iranians in very similar patrol boats. This can be seen from the MoD chart, showing the position of the frigate, and another chart which shows the position of the oil terminals (below). One really does wonder why this has not been publicised more, and why no formal protests were made at the time, especially as the incursions had continued.

However, according to the CNN report, the United States at the time did not see the Iranian moves as "aggressive or provocative". Its assessment was that the probes were "part of an Iranian effort to raise its military presence in the gulf". But officials did say that activity had increased. On at least two days, Iranian patrol boats had crossed into Iraqi waters at the northern end of the Persian Gulf. The boats remained inside Iraqi waters for several minutes before Iraqi security forces (pictured below) told them to leave. 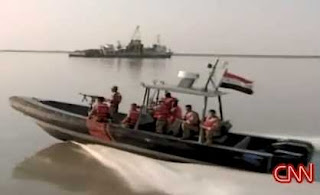 At that time (February) Iraqi security forces had recently taken over the main responsibility for guarding the terminals, although the task force assets remained nearby, as back-up. But, had Lambert so elected, he could have directed Iraqi naval forces to back up his own forces, or even to carry out the freighter inspection.

With so many forces at his disposal, this rather does beg the question as to why Lambert deployed two highly vulnerable Royal Navy craft, sending them on a mission when he knew the Cornwall could not provide back-up. And, one wonders whether other coalition forces in the areas were even told of the despatch of the boarding party. 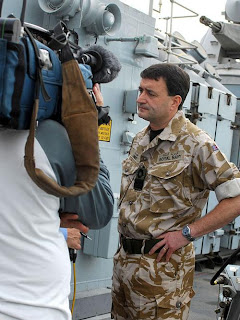 To be fair to Lambert, though, that morning he had far more important things on his mind. With a BBC television crew on board the Cornwall, he was scheduled to give an interview to the BBC's Ian Pannell for a news backgrounder regarding operations in the North Arabian Gulf. Then, incidentally, Pannell got his job description right, giving him the label "coalition task force commander".

However, with a Royal Navy photographer close at hand to take publicity stills (example right) when his sailors and marines had been despatched to their fateful rendezvous, one wonders whether our Nick had taken his eye off the ball.

Would it be too much to speculate that the presence of LS Turney on the boarding party might have had something to do with the presence of the BBC – even to the point of this being the reason why the team was despatched on what, in hindsight, looks to be such a foolhardy mission?

Could that also explain why, after the event, the BBC downplayed Lambert's role, "demoting" him to captain of HMS Cornwall? After all, we would not want the public to know that, when it came to the Royal Navy boarding party, their journey was not exactly necessary.