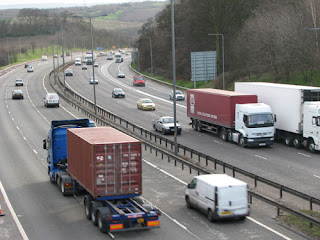 Via its transport correspondent, Ben Webster, The Times has come up with an interesting story which is perhaps more important than most of us appreciate.

Webster reports, under the headline, "Half of foreign lorries tested on Britain's roads found to be dangerous," that half the foreign lorries checked on British roads last year had serious safety defects that could have resulted in crashes.

This is according to official figures published by the Vehicle and Operator Services Agency (Vosa), which carried out 34,500 roadside checks on lorries on international journeys in the South East last year, double the previous year. These show that eastern European lorries are the worst offenders. Prohibition notices were served on 62 percent of those from the Czech Republic, 61 percent from Romania, 55 percent from Latvia, 52 percent from Bulgaria and 49 percent from Poland.

Additionally, foreign lorry drivers were more than twice as likely as British drivers to have breached rules on the maximum time spent behind the wheel without a break. But the big disparity was with Greek drivers (quelle surprise. More than 37 percent had exceeded that limit, compared with 9 percent of British drivers.

Nor does it stop there. Foreign lorries were more likely to be dangerously overloaded, with a third of those from Spain, Portugal and the Republic of Ireland found to be over the weight limit. 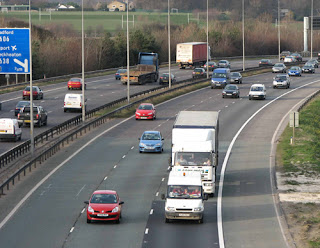 This seriously disadvantages the British truck industry, which is already losing the battle against Continental firms which can hire drivers at cheaper rates than their British counterparts, while paying for diesel which is a third cheaper on average. But, with trucks having been demonised for so long by a broad coalition of Greens, car drivers and just about everybody else, there is scant sympathy for the industry.

Thus, under our noses, so to speak, we have seen our roads taken over by a surge of foreign lorries. Three quarters of all lorries crossing the Channel last year were registered overseas. A decade ago, half were British. On a typical day 12,000 foreign and 95,000 British lorries are on the country's roads.

Apart from the fact that these truck pay no road tax (and also top up with diesel before coming over here, and thus pay little if any fuel duty either), there are significant safety issues. There were more than 1,100 crashes involving foreign lorries in 2005, including 450 side-swipes in which drivers on the left of the cab pulled out into the path of another vehicle.

Here, there is most decidedly an EU element for, as we reported in September last, EU law prevents the UK authorities requiring blind-side mirrors to be fitted to left-hand drive trucks. 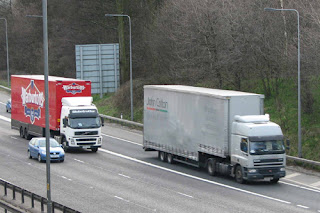 The disparities, however, go beyond safety issues. While Vosa is able to impose substantial fines on British lorries, foreign lorries usually escape any penalty, something again which aggrieves British operators.

To counter this, the Department for Transport (DfT) announced plans a year ago to introduce on-the-spot fines for foreign lorries and clamp those that refused to pay. But a DfT spokesman said the new enforcement system would not be introduced until early next year. Thus we get Ben Webster citing the Freight Transport Association, accusing the DfT of dragging its feet, an accusation which seems well founded.

In many ways, therefore, British truckers seem to be in a situation analogous to that suffered by our farmers and fishermen – only with less recognition of their plight and less sympathy. Beset by a massive and growing burden of regulation, they are forced to compete with their EU rivals who enjoy a much lighter touch (often from our own officials), while able to operate with much reduced overheads.

Whether you have any sympathy for truckers or not, this does not seem right.