A spot of blackmail 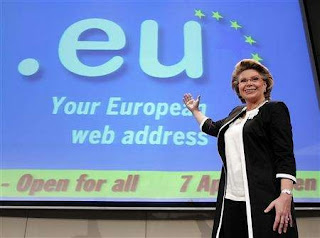 Remember the European Union? It's that uniquely useless, parasitic organisation we used to write about, the affairs of which are so utterly tedious that even we have difficulty dealing with them.

Well, apparently, it still exists and, for the rest of its miserable life, I suppose occasionally we will have to break away from watching what the grown-ups are doing, and have a look at it.

Its latest little trick, perpetrated by what Reuters so quaintly calls the EU "Head Office" – i.e., the EU commission – is preening itself on its .eu domain having clocked up more than 2.5 million web addresses since it was launched just over a year ago.

Never mind the chaos of the launch, the details of which only emerged months later, after strenuous denials from the commission that anything was amiss. The EU media commissioner, Viviane Reding, is trilling that, "After just one year .eu has become a well-established part of Europe's cyberspace".

It has become the third most popular European top level domain name since it launched on April 7, 2006, pipped only by Germany's .de and Britain's .uk. It is the seventh most popular domain worldwide.

Of course, what la Reding does not tell you is that many website owners had no option but to register their own names under the .eu banner, simply to prevent cyber-squatters acquiring them and either holding them to ransom or misusing their names. In effect, millions of owners were blackmailed, being forced to buy into the EU vanity exercise, simply to protect their own interests. For them, the cost of the domain registration is nothing more than a hidden EU tax.

This is borne out by the fact that, while 80 percent of .eu names registered are linked to a functioning website or e-mail server, many of those are simply mirror sites, carrying exactly the same content as their national or generic originals. In a fifth of the sites, owners don't even bother with that, and simply redirect users to another address.

But hey! That's the EU for you – all smoke and mirrors. We'll return to grown-up issues later this morning.