Wailing and gnashing of teeth 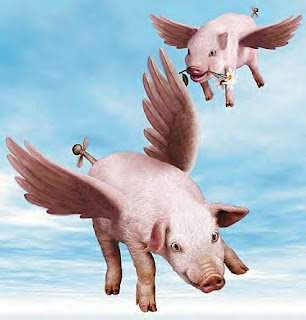 Otherwise known as “ritual huffing and puffing”, as my colleague so eloquently put it. And it does not come just from the Conservative Party either. Here are a couple more examples from organizations we have written about before. Well, three, to be precise and all from organizations that claim to be the leading eurosceptic one and raise money on those grounds.

First off, here is Open Europe, whose representative, I understand, was on yesterday’s World at One, demanding that Tony Blair call a referendum on whatever it is that is going to be agreed in June.

Their media summaries yesterday, understandably, paid a great deal of attention to Blair’s various interviews in which he promised to sign up to “a new treaty”, which will not be a constitutional treaty and, therefore, will not need a referendum.

One wonders how this is going to work. A new treaty requires an IGC, a European Council not being the body in which this is decided. So, whatever it is that Blair will be signing up to, it will not be a new treaty, though, probably just as dangerous as other agreements he and his predecessors have signed up to.

In any case, Open Europe and the other two organizations I shall deal with in a moment, were warned by those “extremist” eurosceptics, in whose presence they hold their noses, that this was a likely scenario. Various parts of the constitution will be pushed through in ways not necessarily noticeable to the political community and a small new document will be presented instead of the constitutional treaty with the assertion that it does not need a referendum.

Try believing us, ladies and gentlemen of Open Europe. We have a good track record of being right. Neil O’Brien’s comment remains somewhat inadequate:

This is a disgraceful attempt to wriggle out of the promise of a referendum. Tony Blair knows that the overwhelming majority of people would vote against giving away more powers to EU officials, so now he is going to take away our right to a vote.

More powers are given away to EU officials all the time and many of those officials, whether Mr O’Brien recognizes this or not, are our own civil servants and quango officials.

The only way of solving this conundrum is by beginning negotiations for exiting and then remodelling our own system. However, I am not sure that Mr O’Brien has changed his views on it from the time he and I were both on 18 Doughty Street and he made it clear(ish) that he would not vote for a withdrawal from the EU. I guess he and his organization are still hoping for that nebulous EU reform that will change the organization to something it was never intended to be.

Then we have the European Foundation, the “leading EuroRealist think-tank”, which describes itself thus:

The European Foundation has been at the forefront of debate on the European Union since it was established by Bill Cash MP in 1993. We advocate an overall policy of “yes to European trade, no to European government.” We believe that greater democracy can only be achieved among the various peoples of Europe by the fundamental renegotiation of the EU Treaties. The Foundation does not advocate outright withdrawal from the European Union, rather its thoroughgoing reform into a European Free Trade Area with political cooperation.

More tales of porcine aviation, in other words. Their chairman, Bill Cash MP, incidentally, is still blathering on about a German Europe as he has been for the last ten years. He could try reading "The Great Deception" but that seems an unlikely development.

They, too, are upset at the apparent development, which, so far, has consisted of Blair giving interviews. Like Open Europe, the European Foundation probably foresaw a great and glorious role for itself during a referendum campaign and this might not happen. (Maybe I am being over-cynical.)

The European Foundation, however, in its own words attached great and unsustainable hopes to the “new” treaty negotiations and the subsequent referendum, without, it would appear, realizing that any negotiation will bring in all sorts of demands from all sorts of member states.

The Prime Minister’s position in preventing public referendum on the EU Treaty is fundamentally wrong and democratically illegitimate. To make the European Union an institution which is beneficial to Britain and the other Member States, and thereby achieve greater democracy among European nations, it is essential for the UK to hold a public referendum and thereby renegotiate its position on the binding treaties of Maastricht, Amsterdam and Nice. Now is the time for the European Union’s thoroughgoing reform, not more mismanagement at the hands of a Labour government which has officially turned its back on the British electorate.

Give me the Commission any day of the week. At least, it knows what it is doing (mostly).

And so, with a heavy heart because I like the people involved and know what their private opinion is, I come to the shining new “business backed campaign” Global Vision. They, too, put out a press release yesterday.

They, too, as our readers will recall, hoped for some new negotiations during which Britain would be able to change the treaties and her own membership of the EU to a series of free-trade agreements. Sadly, this, as predicted at their launch, is not going to happen.

Ruth Lea is absolutely right when she says:

There is no doubt that any new EU treaty will affect this country significantly - especially if qualified majority voting is to be extended. Every treaty means further political integration in Europe and it is disingenuous or dishonest to suggest otherwise.

Of course, it may have escaped her attention that the biggest surrender of policies to QMV came with Maastricht, signed, sealed and delivered without any suggestion (from the government) of a referendum by the Conservatives.

There is no harm in demanding a referendum on whatever is agreed at whatever time through whatever channel but it would be terribly nice if these organizations looked at the whole problem a little more realistically and did not attach that many hopes to questionable contingencies.