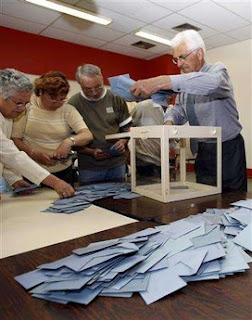 One of the many problems with the United States, and George W. Bush's presidency in particular, we are told at length by British and European commentators, is that he has "divided the country". By this, one assumes, they mean that his victory was relatively narrow in terms of votes (the first one achieved by the number of votes in the Electoral College, not unknown in American history).

Setting aside the fact that it was the Clintons (he and she) who had really "divided" the nation, one wonders why that ought to be a problem and whether it would be seen as such if there were a very narrow Democrat victory in 2008?

After all, in a democracy, votes are often narrow with people choosing various candidates, according to what they perceive to be the right policies or, at least, the least wrong ones. Or they might choose for tribal reasons or on the basis of personalities. The point is that where there is a real choice there will be a division between the choosers. Sometimes one gets enormous majorities even in democracies but that is not as frequent as all that.

What is it the critics of a "divided nation" want? Majorities of 99.8 per cent? Well, perhaps.

The problem arises only when the losing side (the Democrats for a long time and even now, with a working majority in the House of Representatives) refuses to acknowledge the results. In some countries that leads to revolutions and dictatorships, in others like the United States, it can lead to a severe undermining process, which can be dangerous in times of war. If one looks at the American, never mind the European media, the shenanigans in the Democratic Party, in the House of Representatives and, even, sad to say, the State Department and the CIA one can perceive clearly that the Republican wins of some decades have simply assumed to be somehow illegitimate. The reason? Oh well, because Bush has divided the country.

What are we to say about France, a country seriously divided if the votes in the first round of the presidential elections are to go by?

The results were not as close as predicted but close enough with Sarkozy getting 30.49 per cent of the vote, according to the preliminary count, and Royal 25.03 per cent. They go through to the second round where, no matter who wins, half or thereabouts of the voting population will remain severely dissatisfied, not least because, despite a certain lack of clear policies on both sides, the two candidates represent two different ideas about French politics.

Don't get me wrong. Neither is a liberal free-marketeer and both believe in the benign influence of the state. But, it would appear, that Sarkozy wants to use the state to push France into some sort of reform while Royal wants to use the state to promote more distributionist socialist policies. In practical terms neither will be able to achieve what they purport to want but when the voters go to the booths on May 6 these will be the choices they face.

If the vote is close, as it may well be, are we going to hear cries of "foul" and "we wuz robbed"? Shall we be told that France is "a country divided" and, therefore, some illegitimacy is attached to the duly elected President? I suspect not.