Nelson would not be amused 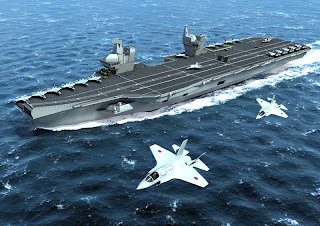 The rumour has long been that the announcement of the long-awaited aircraft carrier orders has been held in abeyance, until just before the Scottish Parliament elections in May. With a substantial amount of the building work slated to go to Scottish yards, a deftly-timed announcement would – or so the rumour goes – do wonders for Labour's electoral prospects.

The Financial Times, however, seems to have a different "take" on the reasons for the delay. Their journalists, James Boxell and Peggy Hollinger, are suggesting that a deal could be in the offing for Britain and France to share the construction of the ships, in a bid to make them more affordable.

There is, of course, a possibility that this is moonshine, as the source of the information appears to ve the French defence contractor Thales, which has submitted a proposal along these lines to the British government – with the approval of the French naval industry.

Not only would this seriously hack of BAE Systems though (in itself, no bad thing), the MoD could find this political dynamite as it has never commissioned warships from abroad before.

That does not stop Denis Ranque, chief executive of Thales, saying: "Building the ships together would be in the best interests of British and French taxpayers," while senior French industry officials are saying that the UK was "sympathetic" to the approach.

The plan is based on the assumption that the MoD wants to build two carriers and the French one, in which case the a French yard could build one-third of the hull for each ship of the three ships while British yards could build the other two-thirds.

Put that way, no British yards would lose out, but BAE Systems is said to be unhappy about the problems associated with managing an international three-ship programme. Based on the experience of previous multi-national defence programmes, the complexities could certainly erode projected costs savings - in the order of £80m - but the political fall-out could be even greater.

The public may have tolerated German trucks for the Army, but Frog ships (or even bits) for the Navy may be another story altogether.

Mind you, we do need some rubber boats.