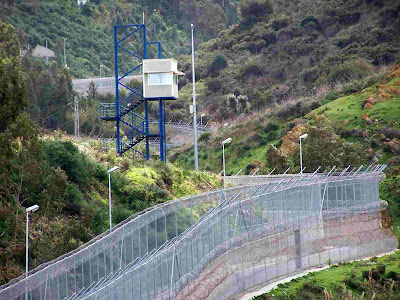 So, as my co-editor tells us, Mr Solana says: "A wall that separates one country from another is not something that I like or that the European Union members like … We don't think walls are reasonable instruments to stop people from crossing into a country … The EU believes immigrants should be treated like people, not like criminals."

Cut to Wikipedia and the Ceuta border fence (pictured above):

The Ceuta border fence is a separation barrier between Morocco and the Autonomous City of Ceuta, in Spain. Constructed by Spain, its stated purpose is to stop illegal immigration and smuggling.

Construction of the €30-million razor wire barrier was financed by the European Union. It consists of parallel 3-metre (10-foot) fences topped with barbed wire, with regular watchposts and a road running between them to accommodate police patrols or ambulance service in case of need. Underground cables connect spotlights, noise and movement sensors, and video cameras to a central control booth.

Morocco has objected to the construction of the barrier since it does not recognize Spanish sovereignty in Ceuta.

Er… construction was financed by the European Union?

Hypocrite does not even begin to describe this loathsome man. But then that's the EU for you.