Journalism is as journalism does 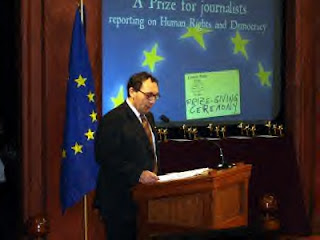 Courtesy of The American Muslim, we get this fascinating story:

Three articles published in The Milli Gazette (MG) print and online editions have been nominated for the European Commission’s prestigious media award ‘Lorenzo Natali Prize 2006’ for journalism given for writings on Human Rights and Democracy issues in the developing countries.

Well, first things first. What is the Lorenzo Natali Prize? Come to think of it, who is or was Lorenzo Natali? Fear not, the information is available:

The Natali Prize for journalism is a price for excellence in reporting on human rights, democracy and development issues. It was created in 1992 by the European Union to promote quality in journalism and to commemorate the devotion of Lorenzo Natali, the former Vice-President of the European Commission in charge of development cooperation between 1985 and 1989. His work and commitment contributed significantly to increase the importance of development cooperation within the policies of the then European Communities.

And so on, and so on. Well, I wouldn’t argue with the second paragraph – freedom of expression, which, sadly, is not encouraged in a very large number of countries, all of them in the UN, is a prerequisite for all those things.

However, I do wonder why a journalism prize is called after an Italian (or any other) politician who eventually fetched up as a Commissioner, a Vice-President of the Commission, no less. What does his career have to do with freedom of expression?

According to the website there were 1,500 nominations so it is not clear how important the news story in The American Muslim is. In fact, it might be worth having a look at The Milli Gazette, which turns out to be the Indian Muslims’ leading English newspaper, full of stories on such matters as “One Million Iraqi Deaths” on the basis of some very dodgy calculations, though, you could argue that is no worse than articles in The Lancet, and a seriously incompetent account of what they call “a Hindu-Jewish Summit”.

Not a whole lot about democracy though or free speech. Still, there might have been a few articles on the subject. What does The American Muslim tell us?

Human rights, democracy and development? Anything, for instance, on the lack of any of those three in most Muslim countries? Well, errm, no, not this time. I shall wait for the results, to be published on the internet in May, with bated breath.