Gosh, some people have useful and interesting jobs 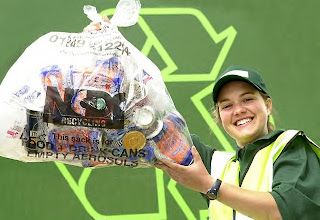 I don't, as it happens, mean that of the Second Sea Lord, in whose naval shoes I would not like to be, or Des Browne. I mean Trevor Thomas,

a member of the fly-tipping crew at the city council, who was called in to investigate the contents of a recycling bag outside Mr Reeves' flat on June 8.

Michael Reeves, that hardened criminal (good to know they have no real crime in Swansea) has lost his appeal against a conviction of ... shock, horror .... putting paper in the bottles and cans recycling bag. Bill Sikes had nothing on this chap, I tell you.

and his general opinion is that all this recycling is not worth the paper it is printed on and he will do nothing about it in future. If you believe that recycling is a good thing, that is not the outcome that you want but I have no doubt that the Trevor Thomases of this world will use this terrible example to frighten children with and to demand the legal right to go through people's rubbish bins inside as well as outside their homes to ensure that they recycle and do it the way they are told to do.

But hey, don't some people have useful and interesting jobs. Puts blogging and political research into perspective.