Update on the Bronze Soldier 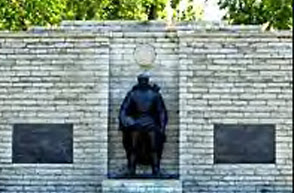 According to the BBC Russian Service website (usually more reliable than the rest of the BBC) there were 44 demosntrators injured and 13 police officers, most the wounds being caused by flying glass. One man is dead, a victim of a knife fight between two gangs of demonstrators, according to the Estonian authorities. 273 people have been arrested.

At an extraordinary meeting the government decided that the Bronze Soldier needs to be removed immediately as in "police custody". Presumably the excavations will carry on when the situation calms down.

It is not quite clear whether this is what the Russian authorities wanted. At the moment there is a great deal of huffing and puffing, with the Foreign Ministry thundering on about "sacrilege" and "inhumanity" and the Speaker of the Federation Council, Sergei Mironov, accusing the Estonian authorities of mocking the dead and those who had liberated them from fascism.

On all sides there are suggestions that the President should break off diplomatic relations with Estonia. The Russian newspaper Nezavisimaya Gazeta (Independent Newspaper and it is, kind of, though not as much as it used to be) says that there will be a meeting outside the Estonian embassy in Moscow. No doubt one of those old-fashioned "spontaneous" meetings.

Actually, there is no pretence even that this is spontaneous. It is being organized by the Moscow City Council and the participants will be activists from the "Young Guard" movement (presumably called after the well-known and somewhat turgid novel by the Soviet hack, Konstantin Fadeyev, about a group of youngsters who organized a resistance movement to the German invaders in Krasnodar) and from "One Russia" party.

Kommersant quotes the Estonian newspaper Postimees, which said that "activists from Russia's Nashi movement have moved into the Meriton Grand Hotel Tallinn (69 euros a night) a few hundred meters from the monument". One wonders (though not too hard) who paid for this indulgence. It would appear that there is considerably less support for the "Night Watch", the self-appointed defenders of the Bronze Soldier, among the Estonian Russians.