Where sheep may safely graze 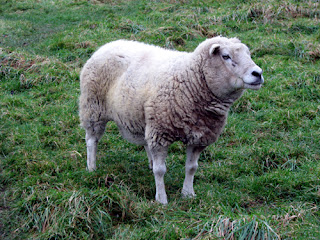 I cannot leave the saga of the bomb attack on the Challenger tank, reported two weeks ago by Michael Yon without noting that every single national newspaper covers the story today, many at some length.

Almost to a man, they quote Professor Michael Clarke from King's College's Defence Studies Centre, with the Daily Mail picking out the phrase describing the tank's armour as, "usually inviolable" – entirely unconscious of the simple grammatical issue that "inviolable" is an absolute. It either is or it isn't. "Usually inviolable" means it isn't.

The idea that a tank is "inviolable" - or "invincible" as some newspapers put it - is, in any event, laughable, straight out of the comic books. The life-expectation of an MBT in Northern Europe, had the balloon gone up and the Soviets invaded, was 15 minutes from reaching the start line.

Most of the newspapers run a picture of a Challenger, but most are old stock photographs. One of them is, recognisably, from the invasion of Basra in 2003. None of them can be bothered to print an up-to-date picture of the beast, heavily modified with skirts and slatted armour.

Rarely do we get such a graphic example of the sheep mentality of the MSM, and their utter idleness. In folk memory, we all have the impression of fiercely independent newspapers, all diligently searching out news, each striving to be the first with a breaking story.

In fact, we have corporate drones, feeding off a diet of press releases and official statements, all lifting each other's quotes – without the faintest idea of what they mean - slapping in meaningless stock photographs to fill up the space.

On the other hand, such is their arrogance that nothing is "news" until they have printed or broadcast it, but they will not run the story until they have the comfort blanket of an official confirmation, and the safety of the flock around them, knowing they are all grazing in the same paddock.

That, dear readers, is the MSM for you. Space filling it is – journalism it ain't.