One must support the EU for moral reasons (not!) 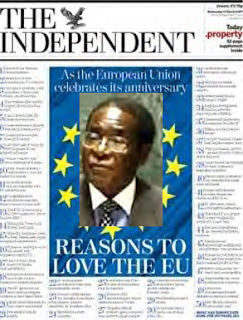 Let us not forget that one reason of the fifty listed by the Independent last month for liking and supporting the European Union was its ability to unite and put pressure on bloodthirsty thugs like Robert Mugabe. Well, if not exactly put pressure, at least prevent them and their best friends and relations from visiting European countries.

As we have seen, this does not always work out, what with people not giving their full names when asking for visas and what not. The question of Mugabe himself coming to Europe has come up again.

A report by Africast says that the Portuguese Foreign Minister, Luis Amado, is muttering that the EU is determined that there will be an EU-Africa Summit in Lisbon in December and if that means asking Mugabe, so be it. He will be asked, given visa and welcomed, undoubtedly with all pomp and circumstance.

The EU, according to this, wants to carry on bilaterally with Zimbabwe in order to exert pressure (can’t see why they should bother as they have been so totally unsuccessful) but, as it has been made clear by Nkosazana Dlamini-Zuma, the South African Foreign Minister, that there can be no summit without Zimbabwe’s participation, the EU will have to swallow its objections.

Incidentally, recent rumours in various publications that the South African government was about to put some pressure on Mugabe or try to replace him by someone else, have clearly not corresponded to anything resembling reality.

The report is quite helpful in explaining the difference between bilateral and multilateral negotiations:

This issue in some ways illuminates two contrasting approaches to analyzing Africa’s problems: the one identifies internal causes as paramount; the other, external causes.

The EU prefers, as a matter almost of principle, multilateral approaches, though, to be fair, those could stress internal causes a bit more with all African countries, especially Zimbabwe. Incidentally, according to a report in the Daily Telegraph, Robert Mugabe has proclaimed joyfully that he has managed to beat off another attempt by Tony Blair to turn Zimbabwe back into a British colony. The reaction of his audience (after the tumultuous applause died down) is not recorded.

Why is it so important to hold this summit, apart from the EU’s need to show that it does have a common foreign policy towards other parts of the world?

One of the main strategic concerns that is now motivating the EU towards holding this summit is the flood of illegal African migrants to Europe in the last few years and the eruption of rioting among African immigrant communities already in Europe.

Amado said the EU and AU were already working on a joint strategy to be ratified at the summit that would include a tripartite approach to the migration problem.

This would be: increased security to address illegal immigration; better integration of legal migrants; and more and better development aid in Africa (to reduce the push factor, presumably).

This does not sound very promising to me. Given the security situation across most of Africa the first one seems all but impossible, unless a huge security fence is built round the European Union, including its sea-shores. It would dwarf the Israeli security fence, so much disliked by the transnational great and the good.

Better integration of legal migrants has precious little to do with the African Union and not a whole lot with the European Union. Each member state has to deal with that separately, not least by working on definitions of national identity, something the EU actually dislikes and tries to undermine.

There seems to be no suggestion that trade, fishing and agricultural policies might be changed in order “to reduce the push factor”. So, we are left with more development aid money that goes to kleptocratic African tyrants, who then continue the wrecking of their countries, thus forcing more people to flee.

It is hardly worth undermining one’s moral standing over Robert Mugabe over this.