Don't you love this global warming? 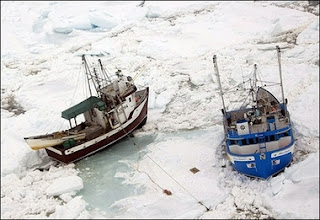 Via American Thinker, we learn of reports that the pack ice off Newfoundland's northeast coast and southern Labrador is so unusually thick that 100 sealing vessels have been trapped and some are at risk of foundering. Even a Canadian icebreaker, drafted in to help, is in trouble, and helicopters may have to be used to rescue stranded crews.

This is a nice contrast with the dire predictions from the global warming scare industry. Says American Thinker:

Al Gore and other thought leaders (Cameron Diaz) keep telling us the ice caps are melting and lower Manhattan will be under 20 feet of water before we know it. I understand Bob DeNiro is so afraid he's selling his Tribeca real estate.

And that idiot Miliband is arranging for all schools in England and Wales to receive a copy of Gore's film, "Inconvenient truth".

As to the current, very inconvenient truth, the Canadian Globe and Mail is reporting that at least 10 vessels, in an area off Fogo Island, are in "extreme difficulty" with the risk that ice could pierce their hulls. There are also three vessels in a similar predicament off southern Labrador, in the Strait of Belle Isle.

Local fishermen say the ice conditions are the worst they've seen in more than 20 years. 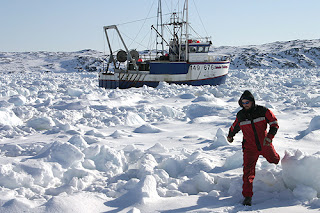 Brian Penney, a superintendent with the coast guard in Newfoundland and Labrador, says helicopters could be called in to rescue stranded crews as a northeast wind continues to jam the ice floes together. "There's vessels disabled, there's vessels damaged. There's crews that are out on the ice because there's quite a possibility that their vessels may sink or the vessels are out on their sides," he says.

He adds: "There's a strong possibility that there will be other crews we may have to rescue by coast guard ship or helicopter."

Earlier in the day, a helicopter airlifted the crew from the Dad and Sons, which was damaged by ice off Fogo Island. Mr. Penney said the stricken vessel is in danger of sinking. "She's damaged and just listed out on the ice, and once the ice pressure comes off there's a good possibility the vessel will sink," he said.

And so on the report goes. I wonder if the Coastguards will be flying out copies of Gore's film for the stranded crews to watch, while they are waiting to be rescued.