The MoD strikes (not) again 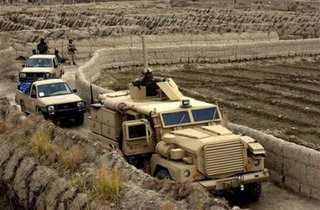 Given that the MoD has been savagely attacked, not least on this blog (most recently here, for its failure to adopt in both Iraq and Afghanistan the widespread use of what the US are now calling the Mine Resistant and Ambush Protected Vehicles (MRAP), you would think that it would be quick to make a public announcement when it responded to the criticisms and actually did something that could be applauded.

But this is the MoD we are talking about here, so it is to the European Defence Agency Website that we must go to find that the Ministry is planning to order 180 of what it terms the "Medium Protected Patrol Vehicle" (MPPV).

With a contract value of between £20-100 million, it is specifying wheeled vehicles for likely delivery into service in early 2009 with an approximate gross vehicle weight of 14 ton, capable of carrying up to seven crew members. It should provided protected mobility and offer very high levels of protection against a number of known and emerging threats of a varied nature including Ballistic, Blast, Mine and Fragmentation.

Says the MoD, MPPVs are principally required for a wide range of patrol tasks and are normally expected to operate on roads and rough tracks in urban, semi-urban and rural environments; however they need to be sufficiently agile to provide a degree of cross country mobility.

Furthermore, the requirement is considered to be "Warlike" in nature and hence the contract will not be subject to the normal EU procurement directives. And, although the programme is currently unfunded, the initial stages of selection have the necessary financial authorisation and the programme is expected to be formalised under normal procurement procedures.

This is actually seriously good news, bringing into the inventory a vehicle of the size and range of the RG-31, Bushmaster or Dingo II types. The betting is, however, that it is more likely to be the four-wheel version of the Cougar (pictured) – the six-wheel version forming the basis for the Mastiff – in order to ensure commonality and to simplify maintenance. 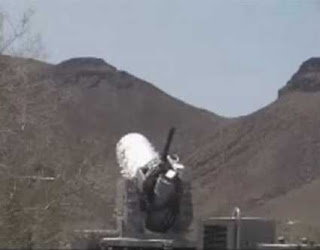 Furthermore, this is not the only good news. An otherwise unpublished announcement from the Defence Procurement Agency asks for bids for what it terms "Indirect Fire Locator, Alarm and Intercept System" (IFLAIS) equipment, for delivery to Basra, Iraq, at a total cost of £9 million.

This sounds like, by another name, C-RAM (Counter Rocket, Artillery and Mortar) equipment, the guns based on the naval Phalanx system, which can shoot down incoming mortar bombs, thus substantially enhancing base protection. At that price, it looks like possibly three systems are on order. At last, troops in Basra are going to get the protection they deserve.

Why the MoD should not thus publish the same the same details on their website is, frankly, incomprehensible.