The economics of war 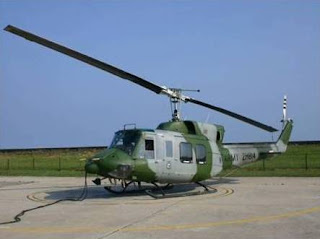 It is a given that Reagan "won" the Cold War by outspending the Soviet Union, forcing it to compete in the arms race and thus driving it into bankruptcy, this precipitating its collapse.

Inevitably, things were more complex than that, and some might argue that the economic effects of the arms race were an unintended, if beneficial effect of a the "Star Wars" policy, in which Reagan actually believed.

Nevertheless, the idea is enough of a "hook" to remind us that there is always a significant economic aspect to most wars, and to assert that, as Reagan used the economic weapon against the USSR, so too – even if unwittingly – insurgents in Iraq and Afghanistan are using the same weapon against us.

This is brought home by Booker, today, in his column who picks up on our piece about the relative costs of Army helicopters.

At least now, a much larger number of people will be aware that the Army Lynx helicopter, designed for use in northern Europe and hopelessly unsuited to hot conditions, is costing £23,000 an hour while the upgraded Vietnam-era Hueys - known as the Bell 212s (pictured top left) – are much better suited to hot conditions and able to carry a bigger payload, and cost a mere (by comparison) £2,000 an hour.

The issue here, however, is far wider that just cost of individual pieces of kit. At stake here is capacity – the ability to deploy enough resources in counter-insurgency operations to have a decisive effect, without breaking the bank.

Short of total war, as in the Second World War, where military spending takes priority over everything, the military will always have to compete for funds against other public spending priorities. And, where there are other more popular (or potentially vote-winning causes) there will always tend to be a shortage of funds.

Shortfalls, therefore, are a fact of life and, while lobbying can have an effect, it will not always be successful. Therefore, if it is to prevail in operational theatres, the military has to find ways of maintaining or improving its capabilities at less cost. 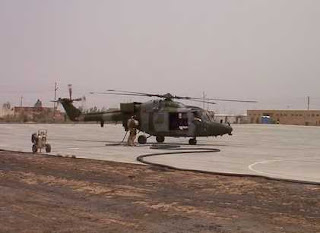 The use of cheaper Hueys is a good example of how this can be done, and we are talking about real money. Although we have already bought the Lynx helicopters (example pictured right), the Army (and Royal Marines) only have 86 Mk7s (less now after losses) on its inventory and they have to last a long time – until at least 2012.

Each aircraft consumes spares and has only so many airframe hours. Once they are used up, the aircraft must be scrapped or very expensively re-built. And, while the Army is heavily engaged in Iraq and Afghanistan, it still has many other commitments, and much continue to train for conventional warfighting. It cannot afford to use up its entire fleet simply on its counter-insurgency operations.

What applies to helicopters, though, also applies to other kit. Already, we established the huge cost of operating Warrior MICVs, at £250 per mile.

While we have been unable to establish the costs of running vehicles like the Mastiff, it is likely to be around the quarter of the cost per mile of running tracked equipment. Furthermore, even Thomas Harding of The Telegraph are prepared to concede that the Mastiff armoured trucks are "more resilient against mines". Their utility is easily confirmed by the US Marine Corps which recently reported that, in more than 300 attacks since last year, no Marines have died while riding in what are now termed Mine Resistant Ambush Protected vehicles (MRAP).

But where some of the really big bucks are spent is not by the Army, but by the RAF in providing air support. In addition to the figures on helicopter operations, therefore, Tory MP Ann Winterton also obtained data on some of the RAF's costs. 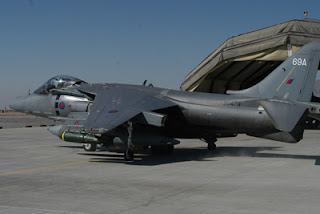 In particular, she asked for the costs of the primary (and only) close air support aircraft provided by the RAF in Afghanistan, the £14 million Harrier. The results again are staggering. According to defence minister Adam Ingram, the cost per hour averaged over the six GR7 and two GR9 Harrier aircraft operating is no less than £37,000. This includes forward and depth servicing, fuel, the cost of one Flight Lieutenant pilot, training support costs and the cost of capital charge and depreciation. It does not include, however, the cost of the ordnance. Bombs are extra.

One issue here is that, in Afghanistan, the targets are very often of low economic value, either small clusters of Taliban armed with cheap weapons, or converted civilian vehicles, often worth considerably less than the cost of the bomb used to target them, much less the cost of delivery.

This problem can confronted by the United States in Vietnam, and was one of the reasons why the famous piston-engined Skyraider was returned to service. Other reasons were its ability to fly slowly and thus deliver ordnance with greater precision than fast jets, and its considerable endurance, enabling it to loiter over the battlefield and deliver ordnance within minutes of a target being identified. 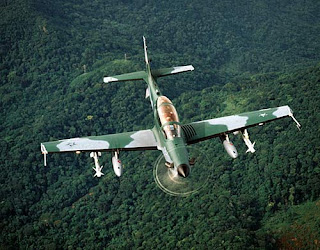 It modern terms we already have an aircraft on the register that could do an equivalent job. This is the Short Tucano, operated as a basic trainer by the RAF. Already, however, a ground attack version has been developed. Notionally, it can only carry a third of the Harrier's load (although the Harrier usually has to carry underwing fuel, reducing its carrying capacity) but that still amounts to five Paveway 540lb bombs.

Unlike the Harrier, which has such pitifully short endurance that it can only be despatched, once a target has been positively identified, the Tucano has a massive 6 hours 30 minutes endurance.

As to the costs, the RAF paid just over £1 million for its aircraft and the total cost per hour is £5,411. For every Harrier hour, you could fly six Tucanos and still have change. That would allow you to have aircraft continually orbiting the battlefield, ready to deliver ordnance in the style of the WWII "taxicab" Typhoons, as and when needed. For sure, that would erode your cost advantage, but the capability enhancement would be significant.

The thing is, such ideas are not new. We applied them in WWII, in the Korean War and the US in Vietnam. Every time the shooting dies down, however, the military forgets the lessons and goes back to buying expensive new toys.

Those lessons, it seems, must again be re-learnt. War, as much as anything, is an economic enterprise and the military (and its political masters) might do well to devote more time and energy to getting more bangs for our bucks.