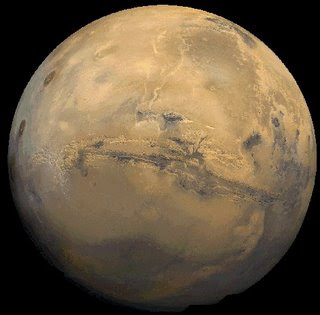 We did it a little while back but now The Times has picked up that Mars is being hit by rapid climate change.

Writing for the paper, Jonathan Leake says it is happening so fast that the red planet could lose its southern ice cap. This is according to scientists from Nasa, who have noted that Mars has warmed by about 0.5C since the 1970s. This is similar to the warming experienced on Earth over approximately the same period.

Since there is no known life on Mars, adds Leake, it suggests rapid changes in planetary climates could be natural phenomena.

Meanwhile, Telegraph correspondent Melissa Whitworth in her clog (corporate blog) on the paper's site, equates scepticism about the human role in global warming with holocaust denial.

I kid you not.