One would have expected a little better… 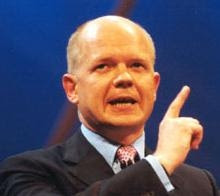 The extraordinarily inept intervention by William Hague, shadow foreign secretary, on this morning's BBC Radio 4's Today programme, almost beggars description. So off the wall was it that one was tempted to ignore it as the posturings of an ignorant fool, evident as such to any sensible person who listened to it. However, such is the "Blair derangement syndrome", and the desperation of the Tory Tribe to see Blair as the fount of all evil, that it is being taken seriously in some quarters. Hague's irresponsiblity, therefore, cannot be allowed to stand unchallenged.

In his interview, what Hague was very clearly seeking to do was to make political capital out of the Iran Hostage affair. There is no political mileage in rooting out the operational failures by the Royal Navy - at the heart of the crisis - so he is instead focusing on the secondary issue of the publication of the hostages' stories, part we believe, of the smokescreen laid down by the Navy to obscure its own inadequacies (and to divert blame).

His tactic is to insinuate that No. 10 Downing Street (and thereby the prime minister) was in the loop, in the making of the decision to allow publication, the inference being that this was all some part of a greater conspiracy, the nature of which has yet to be defined. The plan is to make mud stick.

In pursuit of that, said Hague, "The accounts given in the last couple of days by Des Browne and by the Prime Minister are carefully chosen words which do leave the impression that you haven't really got the full picture." He added: "In a very centralised administration where Number 10 are routinely consulted by all government departments, it seems very odd that the Prime Minister read of this in the Sunday newspapers, they say, when David Cameron (the Conservative leader) and I and Liam Fox (the shadow defence secretary) all knew about this on Saturday."

The facts, though – and even a very basic knowledge if how government works – tell a very different story.

As it stands, it is a wholly undisputed fact that the decision to allow publication was made by the Second Sea Lord, Admiral Johns. Furthermore, it was made in the context of his interpreting Queens Regulations and, as such, was within his power to make.

In the context, this was not a civil servant, proposing a course of action, with the decision made nominally by the Secretary of State. The decision was made by a senior naval officer. It needed no endorsement or further approval. Thus, as is entirely normal in these situations, the Secretary of State was notified but he was not required to endorse the action - simply to "take note".

For the decision not to have been put into effect, the Secretary of State would have had, actively, to have countermanded it. Yet this was a decision by a senior naval officer - which incidentally had the approval of the First Sea Lord. That, is something any Secretary of State would do only reluctantly, with a great deal of thought and discussion. It is not surprising, therefore, that he took the weekend to do it. To do otherwise would have opened him to the charge of eroding the independence of the military.

Now, given that the decision to allow publication was a naval, rather than a political decision, there was no reason why Downing Street should have been involved, or even informed. In fact, there was every reason why it should not have been. There would be the most enormous row if military decisions, made by ranking officers, had routinely to be referred to Downing Street for approval.

Referrals are normally only made if a decision has been flagged as "politically sensitive". But there, the route is via the Chief of the Defence Staff, Sir Jock Stirrup. He is the link between the Secretary of State and the Armed Forces. He also has a direct line into Downing Street. It would have been his job to alert the secretary of state on the issue, and through him the prime minister, if needed. But, as we know, Stirrup was not consulted.

If Downing Street had intervened, it would have been via and in consultation with Stirrup and the Secretary of State. The Military do not take orders from "Downing Street" and the Chief of the Defence Staff can see off interference by invoking his right of direct access to the prime minister in person – even over the head of the secretary of state. This is a privilege which is jealously guarded and remains to this day.

It is thus very far from unbelievable, therefore, that prime minister Blair would have been unaware of a decision made by a Second Sea Lord. Ordinarily, he is not told of such decisions and would not be expected to be aware of them. Only if they had been flagged up first by Stirrup and then the Secretary of State would it have become a "political" rather than an operational matter, and brought formally to his attention.

Hague's intervention, therefore, is simply ignorant, political posturing. He clearly does not have the faintest idea of how the chain of command works in the military, how the MoD itself works - which is very different from other departments of state - or how decisions are made.

As such, therefore, he has no credibility. His speculation is of no significance, other than to show him up as a rather stupid little man, who is doing more harm than good. 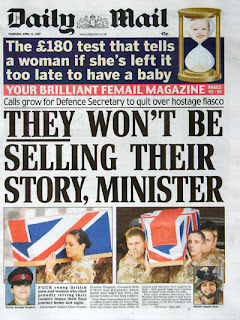 His action, however, is beginning to typify the Conservative approach to this affair. Instead of concentrating on the main issue – why the Cornwall's boarding party was left so vulnerable, it is trying to make mischief for party political gain.

Unsurprisingly, it is being supported by The Daily Telegraph in this mischief, but the Daily Mail is also buying in to the attack on the secretary of state, with its graphic headline today. However, it should be noted that, when it came to the publication of Leading Seaman Turney's story, it offered a fee of £20,000 above anything any other bidder paid. Turney, however, turned it down. And, as we know, hell hath no fury like a newspaper scorned.

That a tabloid newspaper should act in such a fashion is hardly a surprise. But one would have expected a little better from Her Majesty's Opposition. There is too much at stake here for the Conservatives to indulge themselves in party politics. They are adding to an already thick smokescreen, hampering rather than assisting in the search for the truth.