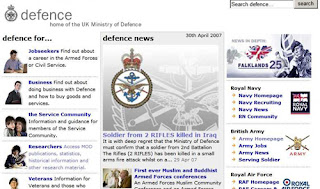 In entirely good faith, yesterday, we published a commentary on the US activities in the Helmand province of Afghanistan – an area under British responsibility - suggesting that our own High Command is blighted by a lack of aggressive spirit.

Today, however, we learn that more than 2,000 NATO and Afghan troops began an operation before dawn "to drive Taliban fighters from another swath of their opium-producing heartland in southern Afghanistan".

It turns out that this is a British-led operation, code-named "Silicon" involving some 1,100 British troops, 600 U.S. soldiers and more from Canada, the Netherlands, Denmark and Estonia. More than 1,000 Afghan government troops are also taking part.

We also learn that the troops are targeting Helmand's Sangin Valley, an area near Afghanistan's strategic ring road that has "for too long been under the semi-control of the Taliban." This latter statement is a quote from Lt.-Col. Stuart Carver, "a British commander", who then says: "It is all part of a longer-term plan to restore the whole of Helmand to government control."

But, incredibly, we learn this not from the MoD website but from the Associated Press via the Canadian Globe and Mail.

The latest item from the MoD is the unfortunate death of a soldier from 2nd Battalion The Rifles but, before that, the last two entries, both on 27 April, are about – respectively – "An Armed Forces Muslim Community Conference and an Armed Forces Buddhist Community Conference" and a firefighting simulator. On the front page, there is not even a link to our operations in Iraq and Afghanistan.

This is simply not good enough. At one level, it is grossly unfair to our troops who are putting their lives on the line. What price morale when their own MoD cannot even recognise their efforts and post details of what they are doing on the web site?

At an equally important level, this represents a complete failure to understand the nature of the war we are waging. As we have written so often on this blog (most recently in relation to the Israelis), there are, in fact, two wars: the shooting war and the propaganda war. We have to win both, which means that we must show our own people and the world that our forces are making progress and securing real gains.

Not least of the problems is that, in the absence of real information about the activities of our Armed Forces, the MoD website ends up dangerously unbalanced. By far the predominance in the coverage is on casualties, which reinforces the Independent newspaper's agenda – that we are taking pain for no gain.

Inevitably, too much "gung ho – derring do" on the site would lead to charges of propaganda, but there is a balance to be struck. No coverage at all – or a very little, very late – is not an option. The site must reflect properly what we are doing in these vital areas.

On the other hand, the MoD cannot complain about the venality of the media if it, itself, cannot publish, sober, well-written (and illustrated) accounts of our own forces' achievements. And neither can we, who broadly support the government's aims, act as a counter to the incessant triviality of the media if we ourselves are unable to obtain information from authoritative sources.

After the debacle of the handling of the Iran hostages, this is yet another example of how the MoD media operation is letting down our armed forces and the nation. As a matter of urgency, it must up its game. We are losing the propaganda war and it is a war we cannot afford to lose.