The credibility of the BBC 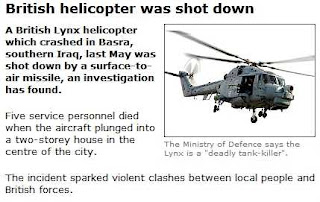 The MoD announced yesterday, the findings of the Board of Inquiry held to determine the cause of the loss of a Lynx helicopter in Basra last year, an event that caused the death of five service personnel – including the first woman to be killed – and triggered a rather nasty riot.

It comes as no surprise to learn that the aircraft was shot down and, to counter any similar incidents, the BoI has made a number of recommendations which, for reasons of operational security, it has not published.

What is remarkable, however, is the BBC's response on its website. It shows a picture of a Lynx helicopter, with the caption, "The Ministry of Defence says the Lynx is a deadly tank killer." But the picture shows not the Mk7 – which is the utility/land attack version which actually got shot down – but the Mk8. This is the naval, anti-shipping/anti-submarine version – a completely different beast, even down to its different colour scheme.

Alright, this may be a small point, which would only be picked up by nerds. But we are talking about our national broadcasting organisation here – with all the inherent authority that that conveys. Its staff should know these things and its lack of attention to small detail strikes of a sloppy, inadequate organisation.

It would be easy to conclude from this (and many other examples) that if you cannot trust the BBC on the small details, that they are equally untrustworthy on the big issues – but that is not necessarily the case. However, such unforced errors certainly do not enhance the credibility of the BBC.