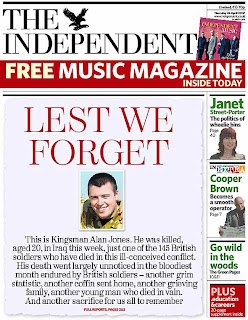 The Independent newspaper ran on its front page the legend "Lest we forget", noting that, this week, Kingsman Alan Jones was killed in Iraq, aged 20. He was, says the newspaper, just one of the 145 British soldiers who have died in this ill-conceived conflict. It notes also that his death went largely unnoticed in the bloodiest month endured by British soldiers - another grim statistic, another coffin sent home, another grieving family, another young man who died in vain.

If the headline sentiment is noble, less so is the tawdy use of the images and memories of fallen soldiers to pursue a withdrawalist agenda, although it is balanced by an authored piece by Major General Julian Thompson who writes on "We must not forget why our soldiers are dying". 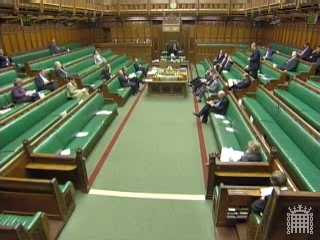 By coincidence, no doubt, there was a defence debate in the House of Commons today and, while it would be grossly unfair to assert that one group which had forgotten why our soldiers were dying is our MPs, the picture of the House tells its own story. For sure the debate was held on Thursday afternoon, which is always difficult for MPs who have onerous constituency commitments (and local elections to fight). But it cannot help but send a message to the world at large about the priority afforded to defence issues by our representatives.

And, as is so often the case, these debates end up rambling and unstructured affairs, largely because of the general, entirely non-specific titles given. This one is no exception, with the title: "Defence in the UK". The way thus becomes open for MPs to air their hobby-horses, rehearsing so many issues that no coherent theme emerges, with nothing useful served.

With the debate still in progress, one watches and listens, more in hope than expectation, but we will report anything interesting in a post later today.