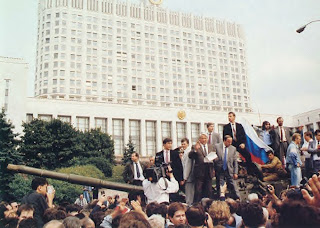 There will be many exhaustive obituaries of Boris Yeltsin, the first elected President of Russia and the man who oversaw with variable success the transition into the post-Soviet era. All we can do on this blog is to make a few points about him that others might miss.

Boris Yeltsin came from the Urals, whose people are among the most difficult in Russia and he certainly lived up to that. Born in 1931, he went through the trauma of seeing his father arrested at a very young age, Yeltsin senior being one of the victims of the Great Purge of 1936 – 39, arrested together with millions in 1937. Unlike many, he survived.

Yeltsin graduated from the Urals Polytechnic Institute and became a construction engineer in Sverdlovsk (now, once again, Yekaterinburg). Subsequently, after a relatively late membership of the CPSU, he became the senior party official for the region.

That, as some commentators have already pointed out, put him in charge of one of the country’s most important industrial areas but it is another episode from that period of his career that most Russians remembered.

Yekaterinburg, as every schoolchild knows or should know, was the city where Tsar Nicholas II and his entire family were slaughtered in 1918, as the White Army was rapidly advancing towards it. It was Yakov Sverdlov, then Chairman of the All-Russian Central Executive Committee (VTsIK), in effect, the country’s President, who ordered the slaughter (no, it was not an execution) and was, in gratitude, honoured posthumously by having Yekaterinburg named after him. What goes around, comes around.

For some strange reason Ipatiev’s House where the murders took place survived the Civil War and subsequent development, becoming in the seventies a place of pilgrimage to many people. Yeltsin’s response was swift and unequivocal: the house was knocked down in 1977. In the post-Soviet era a church was built on the spot.

It was Gorbachev who pushed Yeltsin forward, putting him in charge of construction in the Soviet Union, only to have the man complain about the slow pace of economic reform (perestroika) in the country. This was done at a closed meeting of the Central Committee (not that much glasnost there wasn’t) in October 1987 and within a month Yeltsin was fired as Moscow party chief, his position at the time.

He had a heart attack (as who wouldn’t) and spent some time in hospital. For all of that he was dropped from the Politburo. The “great liberal” Gorby did not like people criticizing him.

From then on Yeltsin went from strength to strength because he grasped an essential truth. The time for keeping rows and debates within the Party behind closed doors had passed. One had to go to the people.

As a matter of fact, that time had never really existed. As long ago as the late twenties, Stalin’s rivals found themselves outmanoeuvred largely because they did not have the courage to appeal to the populace beyond the Party. Possibly they knew that the populace hated them all impartially.

In March 1989 Yeltsin was elected to the Soviet Parliament and in 1990 he became Chairman of the Russian Parliament, the Republic’s effective President, the first one to be elected.

You would think that by this stage it would have become clear to the experts in the West that the Soviet Union was probably doomed. Not so but far from it. While many of us, interested in the country, realized this, the solid cohort of Foreign Office experts and academic sovietologists continued to extol Gorbachev as the country’s hope. Yeltsin was apparently dismissed from too many calculations even though he obviously represented the future with Gorbachev unable to keep up with him.

Then came August 1991 and the attempted hard-line coup, supposedly against Gorbachev. A good deal about that episode remains murky but the winner does not: Boris Yeltsin, who defied the hard-liners in his stance atop a tank.

December 1991 saw the formal dissolution of the Soviet Union, announced oddly enough, on the same day (8th) as the final agreement had been reached at Maastricht, though the treaty was not signed till early 1992. As one of the new developments in the Treaty on European Union (TEU) was the elaborate notion of a common foreign and security policy, it is worth noting that the supposed reason for that cannot be correct. 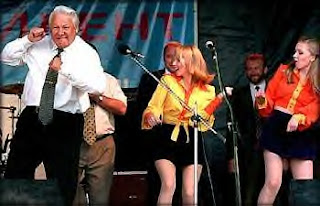 The collapse of the Soviet Union did not force “Europe” into trying to assume the role of the second great power as the negotiations had been going on for some years while the USSR was very much alive though not always kicking.

It is hard to summarize the Yeltsin years in a few paragraphs but looking back, we may be able to describe that period as the height of democracy and liberalism in Russia. At the time it looked like a bit of a mess, politically and economically, what with Yeltsin often indisposed (a good deal of that was genuine illness); the state monopolies privatized at extraordinarily low prices with many shares going to people who had been near the centre of power themselves; the first Chechnyan war started and ended ignominiously with no political development following it; prime ministers hired and fired with remarkable speed; and finally the promotion of an unknown middle-ranking KGB agent, Vladimir Putin.

Yeltsin’s re-election was rather shoddy, with a good deal of money being pumped into his campaign from all sources but such was the fear of resurgent Communism that this was not much questioned at the time inside or outside of the country. 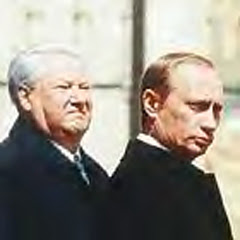 The growing power of the “oligarchs”, most of them former Soviet officials, now Russian biznyesmeni, who were asset-stripping the whole country soured Russian attitudes to capitalism and, sadly, to democracy, as too many of the so-called democrats, zealous in privatization, were linked in various ways to the new rich or “new Russians” as they were known.

Bringing them to heel was the basis of Putin’s popularity, though it is the completely unnecessary and still continuing second Chechnyan war that propelled the man into real prominence. Of course, all that happened was that Putin substituted the previous oligarchs with his own, but these are, in one way or another, state officials.

There we shall leave the subject of this extraordinary man, not least because he, in the end, lived to the age of 76, unusual for Russian men, anyhow, but particularly unexpected for someone who has had quite so many health problems, self-inflicted or not.

One more comment needs to be made. In my opinion, the best way of understanding Russia in the twenty-first century is to look at her history in the eighteenth. The country has no political parties and did not really have them under Yeltsin either; what it has is a number of high-ranking officials whose rise and fall takes their followers up or down, all presided over by a powerful and unaccountable ruler (except through assassination in the past).

As then, so now, Russia is centralizing and integrating power and flexing her muscles, sometimes successfully, sometimes less so, but always uncertainly against the West. She will never be a true friend, no matter what any Western politician thinks but, one day, she might become a reasonable and close acquaintance.