Back in the self-referential bubble 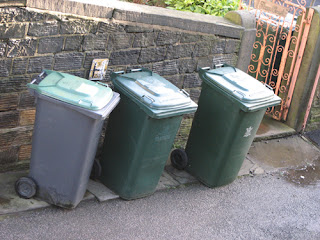 We did not really want to revisit the "Great Dustbin Debate" so soon, but Janet Daley’s return to the country, after a brief sojourn in the USA, and her own entry into the debate, in the op-ed page of the The Daily Telegraph, makes it almost compulsory.

The debate, she says, "exposes flawed politics", bemoaning the fact that, while in the States they are discussing "big arguments, big issues, big world out there…" here, everybody is "talking rubbish."

She then ruminates on "how on earth would I have explained to any visiting American first, how an apparently slight matter of domestic convenience had become a national issue of tremendous electoral magnitude". Secondly, she asks, "how on earth central government was implicated in a policy that in the US would be determined at a level so local as to be microscopic on the political spectrum?"

This, though, is a cue for several yards of extruded opinion. Rubbish, it occurs to the great Daley, "is a totemic symbol of the Great Public Services Scam in which you are consistently charged more and more for less and less." In this way, rubbish becomes, "the final straw: it is the ultimate outrage which captures the essence of what people feel to be wrong about the way they are governed."

Thus does she continue in this vein:

It should seem absurd that Whitehall has any influence (except perhaps in enforcing broad public hygiene standards) on how and when your bins are emptied. It should be risible that national party leaders are pronouncing on the practices and policies of day-to-day refuse arrangements. These things should be entirely in the hands of locally accountable officials who may be free to engage directly in as much debate with their communities over environmental vs public health priorities as they wish.

But, you have guessed it – not a single mention of the "elephant in the room". EU diktats have so inflated the cost of waste collection and disposal that, in the run-up to a major local election, councils are seeking ways of economising and keeping down the headline level of the most sensitive of all taxes, the local council tax.

Thus, while Daley thinks that it "should be risible that national party leaders are pronouncing on the practices and policies of day-to-day refuse arrangements," she has no opinion on the fact that our supranational masters in Brussels have created the situation where rubbish collection has become the issue it has.

By now, though, the EU link is hardly a secret so the refusal to recognise what is staring them in the face absolutely typifies this type of London-centric "chattering class" columnist that Daley really is.

I don't suppose they care one whit how they invite the utter contempt of many of their readers. In their self-referential bubbles, they can continue to hold sway at the fashionable dinner parties and that is all that matters to them. But there is a political cost. From the Daley tendency comes the vapid, shallow "doctrine" of Cameronism and, come this Thursday's local elections – outside the magic M25 circle – we can at least give him a kicking.