The nature of the problem 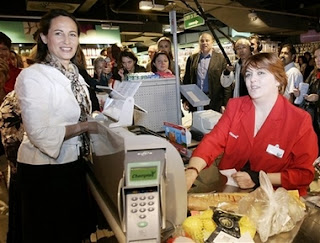 Simon Heffer, in today's Telegraph op-ed tells us that the first round of the French presidential elections is on Sunday. Having been slightly obsessed with other issues (can you be "slightly" obsessed?), it would be fair to say that this point had not really registered. In mitigation, though, one could hazard a guess that, if you asked around in the high streets of England, not one in ten would be aware of the election either.

You can take Heffer's analysis any which way but, for ourselves, we would dispute his opening assertion, that "probably" the only fact we need to know about the election is that approximately 45 percent of the 44 million electorate still haven't decided, or won't admit to pollsters that they have decided, how they might vote.

The one fact we should all know – but no one in the media or the political classes will rush to tell us – is that, on Sunday, the French are starting the process of electing not only a president but a member of our government as well. Through the wonders of the European Union, the new head of state of the French Republic will also become a fully-paid up member of the European Council, that elite supranational institution that decides many of our laws and policies.

In that context, the difference between us and the French is that they get a vote and we don't … but then they didn't get to elect Blair either.

Coughlin's main thesis is that, since so much of the law of the EU member states is now made at EU level, when national ministers wants to get something done they must enlist the support of their EU "colleagues" and must therefore conduct their politicking at a European level. Unwittingly, they are drawn into an oligarchy, a committee of lawmakers, bound by a mutual dependence that owes nothing to national loyalties or electorates.

Thus, writes Coughlin, ministers tend to identify ever more with the great EU project, seeing themselves as political architects of a coming world power. They come to regard the EU (rather than the national) stage as providing the most exalted for their future careers – the place for historic photo-opportunities – and see one of their key functions as delivering their own national electorates in support of further European integration.

Behind the grandstanding of the politicians, however, Coughlin points out that there is another dynamic. The shift of policy areas from the national to EU level frees the national civil servants from the scrutiny of their actions by elected national parliaments. It increases their bureaucratic power as they interact with their opposite numbers in Brussels in drafting and often deciding on EU legislation and policy.

As he reminds us, the great bulk of EC/EU laws are never debated a ministerial level and are simply rubber-stamped if there has been an agreement reached at official level.

EU integration has therefore become not just a process of depriving Europe’s nation states and peoples of their national democracy and independence. Within each member state it represents a gradual coup by government executives against legislatures, and by politicians against the citizens who elect them. It hollows out the nation state, sucking its power from its traditional government institutions, while leaving these still formally in existence.

That is Coughlin's argument and it is a good one, as far as it goes. The reality, of course, is far more complex – and he almost certainly knows that. There is only so much you can write in a short article.

Much of the technical EC/EU legislation to which Coughlin refers is, for instance, not decided by the EU – either officials or politicians - but on a higher level, coming only to the EU officials though that fabled beast, the dual international quasi-legislation/comitology mechanism.

However, even at that higher level, it is still largely the officials who decide so, in effect, what the EU does is simply give an additional dimension to the tyranny of the officials.

But the power of the officials is also exerted at national level, even without supranational influence. With the continued trauma and crises in the Home Office, can anyone really suggest that the Home Secretary is in charge? Given its resistance to reform, can one really say that it is possible even for any secretary ever to be fully in control?

Nor, indeed, as recent events have shown, could it be said that the secretary of state for defence is fully in control of the Ministry of Defence. And, although we initially fell into the trap of blaming the "government" for the "cash for stories" debacle, as events showed, the reality was far more complex.

Therein lies another major problem. Not only have the officials assumed farm more power than is healthy in a democratic (or any) society, we the people are in denial. We cling to the fiction that the politicians are still in control. Thus we continue to demand high-profile resignations or sackings when things go wrong, and we demand remedies for our ills from our politicians that they simply cannot deliver. Too many people simply cannot cope with the idea that their politicians are mere ciphers.

The politicians, of course, go along with it, even claiming authorship for policies which are quite obviously of EU origin – the phenomenon, to which we have drawn attention, of "hidden Europe". Purely for their own self-esteem, they cannot admit how powerless they actually are – how the levers of power are no longer connected to anything and how so much of the political apparatus of power is simply an empty shell.

And that points the way to the first step we must take to restoring our own power – for it is the politicians, not the officials who hold it in trust for us. Ninety-five percent of problem solving, it is said, is defining accurately the nature of the problem.

The ironic thing is – and we're seeing a lot of irony on this blog – the charade will continue on Sunday, when the French go to the polls. And no one will notice.