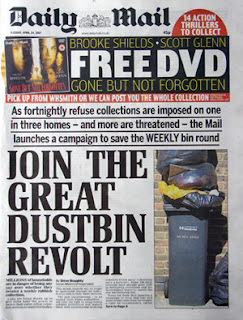 Given the difficulty the media have in handling simple issues like the bombing of a Challenger tank, it comes as no surprise that newspapers like The Daily Mail cannot even begin to grasp more complex matters, like what is happening to our weekly refuse collection.

In today's edition (front page – pictured) it invites us to join the "great dustbin revolt" protesting against the proposed law that is being drawn up "which will give town halls the power to switch entire refuse collection services to unelected bodies".

This will mean, says the newspaper, that councils will no longer be answerable through the ballot box for cuts in their waste services.

But nowhere, either on the front page or the first of two whole pages devoted to the issue (and a three-quarter page editorial), is mentioned the causes of the spiralling costs – the EU's paranoid antipathy to landfill and its obsession with recycling, even though it may be more damaging to the environment and cause more problems than it solves.

It took a gimlet-eyed reader to spot a reference to the EU, downpage on the second of the two main pages devoted to the issue. We get a reference to town halls being having to pay fines if they miss their "EU recycling targets" and a second reference, this one to "EU legislation against landfill". So deeply buried is it that I missed it on the first read.

But then, this is typical. The media generally, both national and local seems to find it extraordinarily difficult coming to terms with EU involvement, something its shares with many politicians.

It is rather appropriate, though, that, since our perfectly adequate refuse collection system has been destroyed by the unelected politicians of the EU, the government is looking to create unelected bodies to manage the resultant mess, to avoid local politicians having to suffer the fallout.

It would be nice, however, if the space-fillers of the media could, just occasionally, tell us what is actually happening, up front, and put the blame where it really belongs.