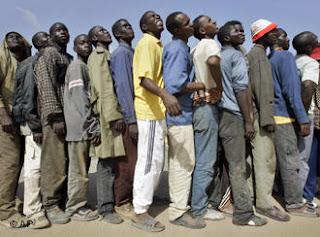 From Reuters, via Defense News, we learn that "interior ministers" of the EU member states yesterday agreed "a rapidly deployable force" of 450 border guards to help states such as Spain cope with sudden influxes of illegal migrants.

The pool of border guards is to be placed by EU states at the disposal of the EU's border agency Frontex for emergencies such as massive numbers of migrants arriving by sea, and should be fully staffed by the end of the year. Wearing EU-flagged armbands, the guards will be deployed within 10 days of a member state requesting help, provided the EU border agency's director gives his green light to the request.

What is fascinating about this is that, last year, at the height of the Canaries illegal immigration crisis, the EU border agency struggled to gather a handful of boats, helicopters and experts for its first joint operations.

Now, however, Ilkka Laitinen, Executive Director of Frontex is positively purring. "The number of assets offered so far by Members States is really satisfactory," he says, adding:

We can only be happy having assets from 21 Members State, among them 21 fixed wing aircrafts (sic), 27 helicopters, 116 vessels, mobile radar units and other special technical equipment. Of course we will welcome warmly any new assets…

No one, it seems, could dispute that the EU is serious about keeping blacks out of Europe. If EU member states could put that sort of resource into peacekeeping operations, though, (in the Northern Arabian Gulf, for instance) the rest of the world might take them seriously.

I suppose we could always send some rubber boats from HMS Cornwall, to show them how its done.