Another demonstration in Iraq 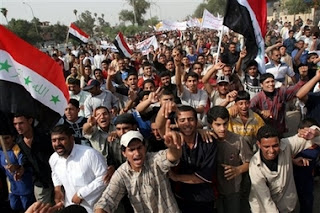 No matter which way you look at it, one can only rejoice in the fact that Iraqis feel that they can demonstrate their political views publicly and as a crowd, whether it is the 10,000 or so in Najaf who called for Americans to pull out or several other thousands who called for the cessation of terrorist violence.

News comes of yet another demonstration in Basra and this time we can all sympathize.

Thousands of Iraqis marched peacefully through the streets of Basra on Monday, demanding the provincial governor's resignation over the poor city services, despite calls by top government officials a day earlier to call off the protest.

If they achieve this, could they possibly come and do something about our city services?

Email ThisBlogThis!Share to TwitterShare to FacebookShare to Pinterest
Labels: iraq