Counter-insurgency in the House 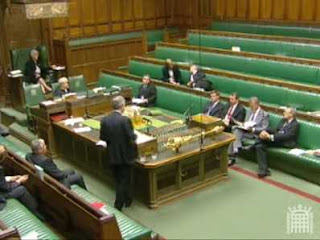 From the defence debate today, Ann Winterton speaking (albeit to a somewhat less than packed House):

I came across a quotation the other day that seemed especially apt for this debate on the UK's defence. In his "The Art of War", Sun Tzu wrote:

That succinctly describes the dilemma facing those charged with the procurement of arms, vehicles and systems for our armed services on active duty on behalf of the UK.

In order to plan comprehensively for the defence of the UK, one has to predict future difficulties and conflicts that could threaten, directly or indirectly, our nation and its interests. It would seem that the present counter-insurgency challenges facing our troops in both Iraq and Afghanistan—part of the war on terrorism—have not been accurately predicted by the military or by politicians. The Home Secretary recently talked about splitting the responsibilities of the Home Office to improve prospects in the war on terror. Perhaps the MOD needs to give a higher priority to counter-insurgency work, and to the necessary procurement for it, because the war on terror will most certainly not go away.

I am often reminded of the phrase "boys and toys" when I hear about the huge expenditure on procurement in the UK's defence budget, not least because I have always believed that it is not what we spend but how we spend it that is more important. For example, the RAF's budget is haemorrhaging because of the Eurofighter—that fantastically expensive creation of European integration—and if we enter into tranche 3, which will provide for ground attack, the aircraft will be too fast to be of any use as close air support in counter-insurgency work.

Similarly, the Royal Navy is besotted with the idea of its two future aircraft carriers, which inevitably absorb most of its funding. However, should not we ask whether those vessels will fit the requirements of the future? They will certainly be of limited value in counter-insurgency work, where the requirement is often as simple as inshore patrol vessels. The Army has been painfully restructured to fulfil the original concept of FRES—the future rapid effect system—to wage war against a conventional army at a distance, as part of the European rapid reaction force, double-hatted with NATO; yet that unattainable pipe dream seems to have been downgraded to the provision of medium-armoured vehicles.

The three examples I have briefly described, with the extra parts bolted on to form the complete packages, are very large funding projects indeed. During the Westminster Hall debate I secured on FRES, the Minister announced that its cost had risen, almost overnight, from £6 billion to £14 billion and I believe that it has now gone up to £16 billion in only a short time. Once again, the question has to be posed: can the UK afford such expensive procurement without compromising lesser but equally important projects with immediate needs, such as those to provide maximum protection and support for our troops on active service in Iraq and Afghanistan? The final question is the $64,000 one: will a future British Government be prepared to continue funding those expensive projects?

The MOD is making great strides in base protection from indirect fire, which includes the introduction of counter rocket, artillery and mortar—C-RAM—about which I asked an oral question on 22 January, following a tragic incident at Basra palace camp. Improved body armour has been supplied. The VIPIR thermal imager is excellent. Mastiff and Bulldog vehicles have been introduced and there are improved electronic counter-measures against improvised explosive devices. As has been said, there are additional medium-lift helicopters: eight mark 3 Chinooks, which are to be downgraded to mark 2s, to ensure that they actually work, and six Merlins from Denmark, which are exceptionally expensive aircraft. In addition, among other items, we now have the underslung grenade launcher and better communication kit.

Where we might be going wrong, however, is that the military, or perhaps even politicians, seem to want advanced technical toys that cover 100 per cent. of all possible requirements. I have already mentioned tranche 3 of the Eurofighter, but there is also the joint strike fighter, the Merlin helicopter and electric armour on new vehicles. Then, on cost only rather than technology grounds, there are the two carriers, Astute submarines, A400M transport aircraft, air-to-air refuelling replacement and the MARS—military afloat reach and sustainability—programme to replace all the Navy’s ageing supply ships. They are all incredibly expensive, and often need massive logistical back-up, yet we simply do not have the manpower to service them without taking personnel from other duties. Nor could we contemplate their potential loss, because we have insufficient financial resources to replace them, even if they could be procured at short notice, which is nigh on impossible.

Over the past three years, I have consistently pursued the issue of counter-insurgency, where the enemy is unknown and is indistinguishable from the local population. That was the main reason I was so sceptical about the original concept of FRES. It is essential for counter-insurgency work to have aerial surveillance, yet I am not entirely convinced of the reliability of unmanned aerial vehicles, which do not come cheap by any means, especially when the Iraqi air force has at least 12 SAMA CH2000 small aircraft fitted with XM15 electro-optical surveillance turrets for less than the price of one Lynx helicopter. However, the Minister will be relieved to hear that it is pleasing that the Army Air Corps now has four Britten Norman Defender 4S AL Mk1 aircraft, which I trust are still in Iraq. I recently tabled a written question on that point. They operate at a fraction of the hourly cost of other aircraft and are no doubt doing a superb job.

With the correct surveillance equipment, an expensive platform is not necessary to deliver results. With the contraction of UK forces in Iraq to Basra air base, for example, the limited routes into Basra should be under aerial surveillance 24 hours a day, seven days a week, as should those routes going south to protect the supply lines from Kuwait. That should not be too expensive, but I wonder if the Royal Air Force and the Army Air Corps would work together and co-operate on such a project.

Moreover, insurgents are upping the ante, as it were, by taking out Warriors and Challengers, but it takes them considerably longer to lay the much larger charges needed than to lay an IED—improvised explosive device—against a Snatch Land Rover. That provides the golden opportunity, if there is adequate surveillance, to catch and deal with the insurgents.

There should not be a shortage of helicopters, as there are plenty of Bell helicopters—commonly known in the American slang as "Hueys"—which can be leased at a 10th of the hourly cost of a Lynx. They can also operate well in the heat of Afghanistan and fly when conditions ground the Lynx.

At present, many of the requirements in the field of defence arise from dealing with insurgents resisting democracy and the UK simply cannot afford to fight that kind of a war by using the most expensive equipment, which is not always the best for the conditions. We can succeed, however, by using practical, cost-effective means such as the electro-optical surveillance turret within a simple platform. We can build vehicles with a balance between protection, speed and manoeuvrability, although it has to be said that reports about the Panther Command and Liaison vehicle have not been all that encouraging. As it seems that many, if not most, future conflicts will have to deal with insurgency, Britain needs a force that is both equipped and trained for insurgency work, which can be achieved at a fraction of the defence budget.

I end my brief contribution by saying that I believe the Secretary of State acted properly and appropriately in announcing an inquiry into the incident involving the Royal Navy and the Royal Marines on 23 March. I trust that the inquiry will have a beneficial long-term effect on counter-insurgency work and that the UK will be better equipped in future to deal with these extremely difficult situations.

I don't know where she gets her information from, but this MP seems remarkably knowledgeable.