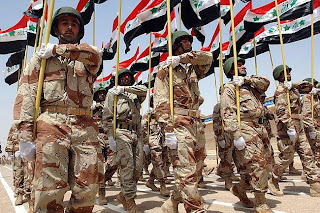 Even against the appalling news in Baghdad today, the formal hand-over of Maysan province from British to Iraqi responsibility is still regarded as a landmark.

Although largely symbolic at this stage, with the British presence unchanged, patrolling the border region, it could be taken either way – evidence of a premature retreat by the British, or a reflection of the growing confidence of the Iraqi security forces and, in particular, the Iraqi Army's 10th Division.

Do we know which way it will go? Hardly, but then, does anybody? But, when you see ranks of Iraqi soldiers marching in step, all gripping their flag-staffs the same, regulation way (pictured), it is clear that some progress has been made.

Even (or especially) in this highly technical age, discipline counts for a great deal. The outward manifestations of that are good drill and military bearing – something the Captain of HMS Cornwall might like to reflect upon.

And if you want to argue with that, have a word with the Brigade of Guards.