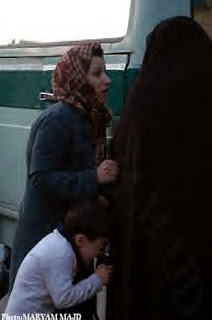 This picture has done the rounds of the Iranian blogs as a symbol of the latest activity by the Iranian government and police. There are more pictures and a video of police rounding up women who are not veiled in a "summer campaign against immodesty".

The behaviour of the police has been such that even conservative Iranians including prominent politicians like Ayatollah Seyyed Mahmoud Hashemi Shahroudi have protested (though the latter simply thought the methods were counterproductive).

150,000 women were arrested in the first four days and all but a handful have signed an admission of guilt and a formal apology. 13 will stand trial and an unspecified number has been given psychological counselling.

Unsurprisingly, ministers have been jumping up and down and praising both the idea and the execution of it as right and proper. 203 members of the Majlis (Iranian parliament) have signed a letter to General Ismail Ahmadi Moghaddam, which praised the police and blamed the United States and Israel for inciting Iranian women to defy what they see as the Islamic dress code.

The courageous Iranian blogosphere (or blogistan) has been running the story in English but, especially, in Farsi with citizen journalists taking photographs and videos.

Oh, by the way, has anyone seen a comment from left-wing feminists of either sex?