Which way will it go in Turkey? 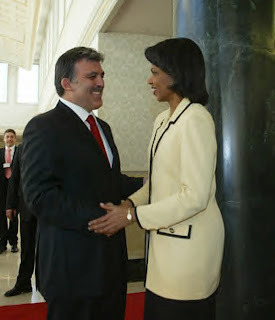 We did not write about the horrific news from Turkey last week of the three Christians tortured and murdered not because we do not think it was important but because it was adequately (if sometimes lamely) discussed in the media and there was nothing we could add.

We do not think it is likely that the criminals were "ultra-nationalists" and, judging by those arrested, neither does the Turkish police, though it seems to have been the line taken by some journalists in Britain. One cannot judge a country by appalling crimes of this kind but only by the way they are dealt with. So we wait and see.

Meanwhile, the presidential elections are coming up there, as well, though the President is not elected directly but by the Parliament. There was some worry that the Prime Minister Recep Tayyip Erdogan would run for President, a largely ceremonial position though with some power to prevent legislation. The outgoing President, Ahmet Necdet Sezer, has vetoed a record number of bills and appointments to protect Turkey's cherished (well, by some) secular order.

Mr Erdogan's ruling Justice and Development Party (AK) is more Islamist and there has been some worry, especially in the army that sees itself as the guardian of the secular state as created by Kemal Atatürk, that he would run for President. Secularists, including those who came out to demonstrate earlier this month against Erdogan, see him as entirely unsuitable for the position.

As Der Spiegel reports Mr Erdogan has tried to defuse the tension by announcing that the party's nominee (and, given the parliamentary majority, a certainty for the postion) will be the current Foreign Minister, Abdullah Gül (seen with Secretary of State Rice in an official State Department picture above).

The solution is not totally satisfactory from the secularists' point of view as Mr Gül's views are seen as similar to Mr Erdogan's.

Like Erdogan's wife, Gül's wife Hayrunisa wears a headscarf and secularists are opposed to the idea of Islamic attire in the presidential palace. Head scarves have been banned in public offices and on university campuses since Atatürk's Western-style reforms in the 1930s.

"His mind-set is no different than Erdogan's," Mustafa Ozyurek, deputy chair of the main opposition party, Republican People's Party, told the AP. "There is no evidence that he is sincerely loyal at heart to the secular republic and principles of Atatürk."

To be fair, Mr Erdogan's government did not turn out to be as strongly Islamist as was feared but that may have been because of control exercised by the President, something that will disappear now. Meanwhile, the army is watching keenly for any signs of backsliding from the Kemalian settlement.