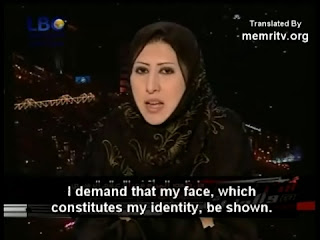 If you can, watch this tape provided by MEMRI (and translated by them) of Buthayna Nasser, a Saudi newscaster, socking it (there can be no other way of putting it) to a Saudi cleric on the subject of women's equality as a given and on the brainwashing that passes for education in that country.

She is an astonishingly courageous lady, given what has happened to women who have claimed the right to work professionally in Muslim countries. I do have one question but I suspect I know the answer. Will the Western left-wing feminists speak up for her and support the fight she and others wage? Hmmm, let me think about it.
Posted by Helen at 17:03