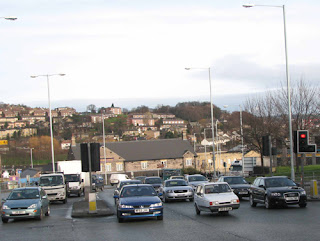 Shame on all of you who didn't know it was the first ever European Road Safety Day yesterday. We are amazed that the forum wasn't flooded with angry demands for us to do a post on it.

It might also have been European Union propaganda day as well – except that that is every day. The Eurospin médecins were certainly out in force extolling the virtues of the "European Road Safety Action Plan" launched in 2001 with the aim of reducing the total number of deaths from almost 50,000 to 25,000 by 2010.

According to the EU commission press release, Le Plan "continues to deliver results" and the target of saving 25,000 lives on Europe's roads by 2010 is "attainable".

Of course, one is not supposed to look up what they said last year, but it was in February 2006 that a rather subdued EU transport commissioner, Jacques "Wheel" Barrot conceded that the plan was not not likely to achieve its 2010 goal. "At present rate," the commission noted, "road deaths in the European Union in 2010 are likely to stand at 32,500".

Conveniently, the latest set of figures are not available on the EU website but the commission is claiming the last 12 months have seen an eight percent reduction in the annual fatality rate.

In 2006, nearly 12,000 lives were saved in the European Union in comparison with 2001, an achievement, the commission says, which shows clearly the "ambitious objective" of halving the death rate "was justified". "Thanks to the concerted efforts of the European Union we can reach our target in 2010, provided we stay on course,” purrs Barrot.

Now, the programme started in 2001 and is six years in, with four to run and has produced less than fifty percent of the projected reduction. And this means the commission is going to meet its target?

Anyhow, buoyed with his success Barrot is now proposing an EU-wide law for the more serious road driving infringements allowing a culprit to be fined or otherwise brought to justice in one member state when the incident happened in another. Thus, a German driver caught speeding in France could be fined according to French law even after he had returned home. Under consideration are speeding, drink-driving and not wearing a seat belt.

"We need to give a European dimension to the fight against danger on the roads," says Barrot. The Euro-ticket cometh.