Glory on the cheap? 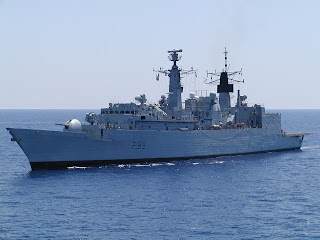 As the Iran hostages saga progresses, the very worst of British politics is coming to the surface. It has descended into a party political squabble, with the main Conservative opposition party trying to extract sectional advantage, largely ignoring the serious operational issues in favour of trying to pin as much blame as possible on the political head of the Armed Forces.

However, it remains the case that, at the heart of this issue were serious operational failings, the responsibility for which must reside with Royal Navy commanders. And, at the heart of these lie failures in command and control, with the man in the frame being Commodore Nick Lambert, commander of Coalition Task Force 158.

Failure though, is rarely one-dimensional and, behind most headline events (such as the abduction of the personnel from HMS Cornwall) lie a complex chain of interlinked events and circumstances – some apparently unrelated to the proximate cause - which, collectively, gave rise to that event. In my studies of complex failures elsewhere, I came to call this the "event cascade", a term I have not seen used in other studies.

Some of those events have been raised on this blog, and in our forum where some of our more knowledgeable commentators have made interesting points, and raised important questions. Other points have, of course, been made elsewhere.

Some of these bring to light issues which have been touched upon earlier but have not been fully explored and may help to explain (if not excuse) some of the more egregious command failures. 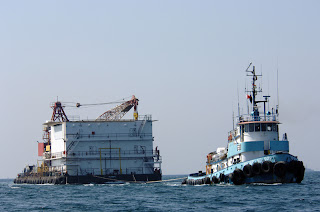 Looking first at a few of those issues, questions have been raised about the Lynx helicopter – and the fact that only one was boarded when a Type 22 frigate can carry two - about the apparent communications difficulties between HMS Cornwall and the boarding party and, right up front, why Commodore Lambert seems to have taken his eye off the ball.

Oddly enough, all those disparate issues may be linked, and in an unexpected way – resting with the single fact that HMS Cornwall, in addition to being an active part of the Coalition Task Force, was also providing the "command platform" for Lambert as task force commander. It had, therefore, a dual role.

Now, as we know, batch III Type 22 frigates – of which HMS Cornwall is an example - are equipped to carry out flagship duties, being fitted with "excellent command and control and communication facilities".

However, there are flagship duties and flagship duties. Commanding a multinational task force, which is itself part of a larger multinational maritime effort, is in the upper end of the spectrum of capability requirements. In addition to the major communication load, there is a substantial staff needed to fulfil the range of duties – the US Navy had 50 of their own staff, plus the liaison officers, etc. – which may well have imposed an excessive burden on a mere frigate, which was also tasked with operational duties. 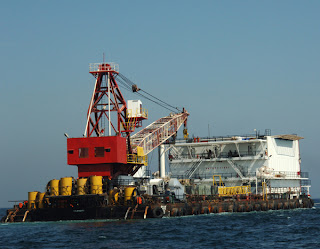 Certainly, when it came to providing the command function – in the absence of a capital ship (such as an aircraft carrier) in the northern Gulf, the United States Navy chartered a capacious sea-going barge called Ocean 6 (pictured). This was designated as an "Afloat Forward Staging Base" and features all the information and coordination capabilities of a coalition warship's Combat Information Centre. It also had berthing areas to house expeditionary forces, a galley to rival many warships and even a helicopter landing pad.

Additionally, says the US Navy (link above), "the barge will meet the quality of life goals of the Navy by providing Sailors and Marines serving arduous security assignments on the oil platforms in the NAG, wireless internet, flat screen televisions and crew lounges."

When it came to the British take-over of command on 7 March, however, the functions were moved to HMS Cornwall. As best, accommodation must have been cramped and facilities fully stretched. This may explain why a second helicopter was not carried – much of the hanger space would have been devoted to dealing with the overspill from the command function. It could also explain why the helicopter was pulled back from the "overwatch" for the boarding team – it was needed for task force duties.

The question must arise, therefore, as to whether HMS Cornwall was suitable for such an exacting task – in addition to carrying out her operational duties. And this may put a different perspective on the apparent failures of Commodore Lambert. Was he - and his staff - simply being asked to do too much with inadequate facilities?

If this is an issue, it would bring a new and highly political dimension to the Iran hostages drama. It might suggest that the Labour government, anxious for the prestige that command of the Coalition Task Force would bring, allowed (or even required) the Royal Navy to take on the role, without providing the necessary facilities – glory on the cheap once again, some might say. On the other hand, did the Admiralty take on more than it could chew, without informing its political masters of the possible consequences?