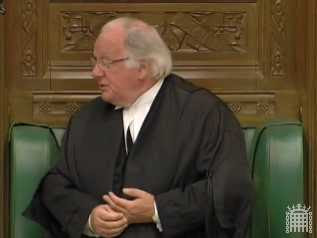 One of the better known rituals of British Parliamentary life is the weekly joust known to one and all as Prime Minister's Questions (or PMQs to the cognoscenti), where the prime minister of the day presents himself to the House (always spelt with a capital "H"), theoretically to allow himself to be held to account by our dedicated elected representatives.

Of course, it isn’t like that. The ritual is simply an opportunity for the opposing parties to score points off each other, generating some heat but very little light. And, if the truth was told, it was ever thus.

However, even allowing for that, there are certain rules that apply – or should apply – to the conduct of MPs. These are enforced by the Speaker, currently the Rt. Hon Michael Martin. Unlike the US system, where the Speaker is elected by the majority party and takes an overt partisan line, the British speaker is elected by the whole House and is supposed to be strictly neutral, applying the rules of the House in a fair, non-partisan manner.

That, however, is not for Speaker Martin, or G. Mick as he is known. A dour, working-class Scot, he has a chip on his shoulder larger than the Titanic's iceberg and just as deadly – at least to the good order of the House.

That, at least, is the opinion of the Daily Mail's Parliamentary sketchwriter, Quentin Letts, although he did not use those words. In his column today (no link) he complains long and bitterly about Martin who, yesterday, allowed PMQs to degenerate into a bear garden.

Letts's proximate cause for complaint is Martin's treatment of two Lib Dem MPs when they tried to speak. The first was Norman Baker who, when he stood to ask his pre-allotted question to the prime minister, was assailed by prolonged heckling from the Labour benches.

The noise was astonishing, writes Letts. Even though Mr Baker had a microphone nearby his voice was lost in the clamour. There were shouts of "prat!", "cheer up, Norman", "oh no!" and "siddown!". Letts continues with his narrative:

Given the noise, Mr Baker was understandably taking it slowly. "Too long!" yelled Labour voices. There must have been 100 Labour MPs shouting at him, some of them going red in the face.

Come on, come on, you say, it was only a bit of fun. I don't agree. I suggest it must have been physically frightening for Mr Baker to stand there, separated by only a few feet from so many top-volume voices and so much flying spittle

Mr Blair could not hear clearly what was going on. Nor could the Speaker. He was screwing up his eyes and leaning towards his own loudspeakers. So why didn't Mr Martin call "order"? Why did he not stop the thugs? Was it not his duty to do so?

This was only the first of two, and when Lib-Dem MP Simon Hughes stood up, he too was heckled beyond any acceptable level. Letts recounts, "Labour MPs even hissed him. Hissed! He was asking a serious question about pensions."

But did Martin intervene? Letts tells us that he not only let it happen but also sided with the hecklers, telling Mr Hughes (who had been struggling with the interruptions) that his question had been going on too long. Yet moments earlier, the same Speaker had allowed a sycophantic Labour MP, Kitty Usher, to ask a question that was at least as long.

The Mail's sketchwriter is by no means alone in his complaints. Opposition MPs routinely get the rough end of the stick, being harried by the Speaker when they try to put questions to errant ministers, while allowing long, rambling and often irrelevant questions from Labour backbenchers.

It was notable last year, when Martin was in hospital being treated for a heart attack, and the deputy Speaker, Sir Alan Hazelhurst took over, how much better ordered questions were. It also came as something of a shock to ministers as well, as opposition MPs we able to ask their questions, without the Speaker running interference.

For the average punter though, who perhaps sees only the shortest of clips on Parliamentary proceedings on the television news, the partisanship of the Speaker does not come over. What they do see, though, is the unregulated bear garden, which reflects badly not only on MPs but on the institution of Parliament itself.

All good theatre, some might say, but it does add to the growing disillusionment with politics, diminishing still further the one institution which, in theory, is the bastion of our liberties. Speaker Martin should, therefore listen to that most famous of all his injunctions, "Order! Order!".

Of course, he will not.