Return of the undead 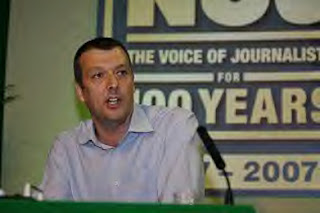 Most of us, I suspect, have forgotten about the existence of the National Union of Journalists (NUJ) in the UK and Ireland. They were the people who, back in the sixties and seventies, prevented the publication of newspapers if any journalist refused to tow their rather left-wing line, tried to make journalism into a closed shop and, indirectly, led to the newspapers vacating Fleet Street. As time went on, more and more journalist refused to join the dinosaur-like establishment of the NUJ, with its talk of chapels and fathers of chapels and its adherence to a pro-Unions, pro-Soviet, anti-American line. Either they joined the British Association of Journalists (BAJ) or stayed out of the Unions altogether.

Like others, I assumed that the NUJ has more or less disintegrated, having not heard much about it for some time. Not so and far from it. This week-end the NUJ is celebrating its 100th birthday in style.

They gathered in Manchester and proclaimed various matters. Firstly, they gave the General Secretary, Jeremy Dear a standing ovation as he pledged to fight low pay and raise respect for journalists and journalism. Good to know that important matters come first – their own pay. In fact, on November 5, anniversary of the Gunpowder Plot and the day on which the Society of Editors meet, members of the NUJ will have a nation-wide Day of Action.

As Mr Dear put it in ringing tones:

What I will say is that we will make it understood, loud and clear, that we will not tolerate the low pay which blights the lives of thousands in our profession, the stress from under-staffing, the lack of work-life balance and the bullying by mangers to achieve unrealistic targets.

Then they congratulated themselves on their “hugely successful” campaign Journalism Matters last year, though they did not actually ask to whom. Nor does there seem to be any indication that when they are defending journalism and telling us that it matters, a certain word, “quality” might be useful to remember.

The outgoing President, Chris Morley, and succeeding speakers managed to remind his listeners of the dear old days that sidelined the NUJ once and for all:

Outgoing President Chris Morley called on the union to embrace the next 100 years by insisting that journalists and journalism are valued, and that we recruit more and more members to the union in order to ensure that it remains a strong fighting force far into the future.

As debate got underway, the burning issue of integration immediately became the subject of discussion. Conference was strongly committed to fighting the widespread loss of staff that has come under the guise of serving the multi-media agenda. Delegates welcomed the exciting new opportunity for the profession but insisted that staff terms and conditions and quality of work must be maintained.

Interestingly enough, news of all this came through somebody live-blogging at the conference, though, presumably, the new media is rather frowned upon, as few of its members are or have ever been or are ever likely to be members of the Union.

On to the various motions. Condemnation was issued of the kidnapping of Alan Johnston, the BBC Gaza correspondent, whose prolonged absence coupled with no demands for any kind of ransom is beginning to look slightly odd. The latest AFP report suggests that he may have been murdered by a little-known Islamic group but there is no confirmation and no apparent reason for such a development. It would appear that the NUJ Conference was unaware of this but then his kidnapping had not been on the agenda in the first place.

What has exercised a lot of people on the blogosphere and, to be fair, a lot of journalist is the motion passed rather narrowly of a call for the boycott of Israeli goods. So far even the NUJ has not actually said that the Israelis had kidnapped Mr Johnston but, undoubtedly, many of them believe that it was their fault.

The Jerusalem Post, which reported the story (good to know somebody is paying attention to the NUJ) gives the figures. The NUJ has 40,000 members – somewhat surprisingly high but, obviously, not nearly all journalists in Britain and Ireland. The motion was carried by 66 votes to 54. Clearly, the overwhelming majority of British and Irish journalists found something better to do on a warm April week-end.

The whole complicated saga of the Motion is described by Little Green Footballs and the JP. It seems that the boycott was part of a composite motion proposed by the South Yorkshire branch and opposed by the Cumberland branch. (Don’t these people have anything better to do on a warm April week-end? Are there no stories about man-made global warming to write?)

The boycott motion was the third clause of a larger anti-Israel resolution proposed by the union's South Yorkshire branch that condemned Israel's "savage, pre-planned attack on Lebanon" last summer and the "slaughter of civilians in Gaza" in recent years.

Motion 38 also called for supporting the NGOs Jews for Justice, the Palestinian Solidarity Campaign and the Council for the Advancement of British-Arab Understanding.

After an hour of debate, a motion to sever the boycott clause from the condemnation motion was adopted. The motion condemning Israel's "savage" behavior toward Palestinian civilians in the wake of "the defeat of its army" by Hizbullah passed by a wide margin.

It’s not simply the insane bias I object to but the complete ignorance of what actually happens in the Middle East. One wonders about those brilliant reports by Alan Johnston.

After this display of journalistic fireworks, which demonstrated how much journalism matters, there was several abortive hand counts on the call for a boycott motion with the eventual far-from-brilliant result.

There were immediate words of disgust and disapproval from journalists who feel that they are not exactly represented by the lefties who are setting the agenda in the NUJ (as if that were some kind of a surprise). Others asked whether the NUJ was now going to call for a boycott against such places as Saudi Arabia because of its oppression of women and the possibility that women broadcasters will be forced to wear the veil on TV; or against Russia, which has been described as the second most dangerous country for journalists in the world, after Iraq and without the insurgency; or against China because of its suppression of free speech; or many others. It seems not.

Another suggestion by one commenter on the Press Gazette story was that the journalists might like to start by giving up all the electronic goods they possess that had been made fully or partially in Israel (and refuse all medical treatment that has been made possible by Israeli research). That, too, is unlikely to happen.

There is another delightful note in the Jerusalem Post, who seems to have the story largely from the Guardian, which fills me with nostalgia. It appears that among other motions, whether passed or not is unclear, were a condemnation of the US detention centre in Guantanamo Bay (but not of the imprisonment of Cubans in other parts of that country for such crimes as displaying copies of the UN Human Rights Charter) and support for Hugo Chávez.

That would be Hugo Chávez, who refuses to renew the license of TV stations that criticize him, controls most of the rest of the media and has been described as being somewhat uncomfortable with press freedom. Just the sort of chap the National Union of Journalists ought to be supporting, especially as part of their Journalism Matters campaign.