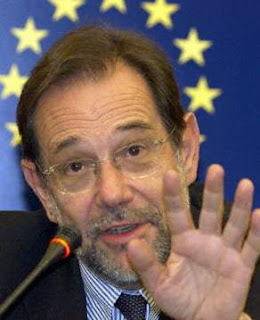 A few days ago AP reported that Javier Solana was criticizing the United States for building a fence along its border with Mexico in order to control illegal immigration. What it has to do with Solana is anybody’s guess and, unsurprisingly, at least one blogger was somewhat unhappy.

Of course, neither he nor the people who commented on the blog know what the EU’s own policy on immigrants is. Otherwise they might have found the following, how shall I put it, a little hypocritical:

"A wall that separates one country from another is not something that I like or that the European Union members like," Solana said at a news conference in Mexico City. "We don't think walls are reasonable instruments to stop people from crossing into a country."

Oh really? So, ahem, what is Frontex with its rapidly accumulating military power all about? Allow me to remind our readers what the Director of Frontex said:

We can only be happy having assets from 21 Members State, among them 21 fixed wing aircrafts (sic), 27 helicopters, 116 vessels, mobile radar units and other special technical equipment. Of course we will welcome warmly any new assets…

Nor should we forget the planned force of 450 rapidly deployable border guards that will be able (theoretically) to rush to the aid of any country that is having problems with immigrants.

Presumably, all this is needed simply in order to invite the illegal immigrants to a tea party.

It seems that Javier Solana managed to forget about several things. Frontex, of course, but also the agonizing discussion of the porous Spanish border and the various camps for immigrants created by the Spanish government with EU approval in it enclaves in North Africa. (Maybe that is what they want Gibraltar for.) We have covered the story recently here and here, mentioning the curiously inhuman approach by the EU to potential immigrants (as well as the policies that lead directly to this problem).

In fact, now that I think of it, we have written a great deal of the way the EU treats the poorer countries and the immigrants from them. What is the Spanish for motes and beams?