No wonder they don't want to talk about it 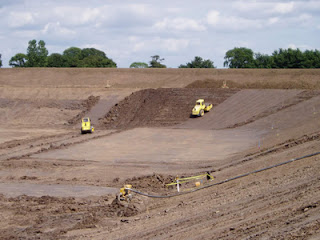 Anyone listening to BBC Radio 4's Any Questions yesterday would not have gained the impression from the panellists, dealing with the question of fortnightly refuse collection, that the issue was anything other than a tussle between central and local government.

Between the patronising Patricia Hewitt, health secretary Hazel Blears, and the braying of the Lib-Dim MP, Susan Kramer, the decision was either local or dictated by central diktat. Not once did any of the panellists mention the elephant in the room – the EU and its framework waste directive.

It thus takes Booker, today, to write that, in all the acres of newsprint devoted in recent days to the chaos engulfing our rubbish disposal system, one crucial ingredient has been almost entirely lacking. This is, he tells us, a proper explanation not only of why we have got into this mess but why it is soon going to cost us billions of pounds, including huge fines to Brussels, which alone, on official figures, will soon total more than £1 billion.

And so we get the story:

When in 1999 the EU decided to phase out the landfilling of waste with its Landfill Directive, this was always going to hit the UK much harder than anyone else, because we have traditionally put much more of our rubbish into holes in the ground than other countries. There was nothing intrinsically wrong with that, since it has been used to reclaim large areas of land which might otherwise serve no useful purpose. 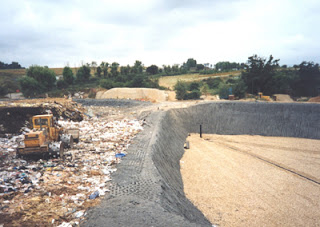 Two main instruments were used to enforce this policy. The first was that, under the directive, each country was set targets for reducing landfill, with hefty fines by the EU for anyone failing to meet them. By 2010 these will amount to £150 for every ton of waste by which each local council exceeds its target.

The second instrument, to encourage us to meet our targets, was the landfill tax, which Gordon Brown has just increased over the next two years to £32 a ton, a rise by next year of 33 percent. The Local Government Association has just released figures showing that, over the next four years, this will cost council taxpayers a staggering £3 billion.

Despite this, however, we will still be so far short of our EU target that, by 2013, the National Audit Office estimates that we shall be paying £205 million a year in fines to Brussels. Within ten years those fines (again payable by council taxpayers) will have amounted to well over £1 billion; in addition to the billions of pounds we shall be paying in landfill tax.

Unlike any other country in Europe, in short, we shall be hit by the Landfill Directive by a massive double-whammy. Hence all the ridiculous measures now filling the newspapers which councils are now taking, in a desperate effort to increase "recycling" and reduce our dependence on landfill. In fact, as I reported last month, much of this is based on bureaucratic humbug and statistical juggling. Much of what is shown as being collected for "recycling" is not being recycled at all. It is either being shipped out to the Far East, or is still being quietly put into tips here in Britain, but in such a way that it doesn't show up in the official figures as "landfill".

If the newspapers currently running campaigns on "bin chaos" really want to do something about it, they could begin by explaining just how this disaster has arisen. It does seem rather crazy that we should all be having to pay £3 billion in the next four years, in a vain bid to avoid having to pay a further £1 billion in fines as a free gift to our EU partners - all because our politicians should never have agreed to this dotty system of waste disposal being imposed on Britain in the first place. 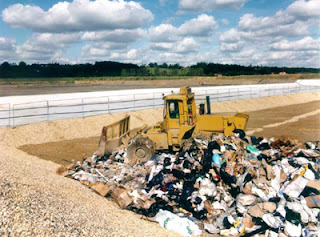 To be fair, Vicki Woods in The Telegraph yesterday wrote a stonking piece, attacking the chaos over refuse collection, under the title, "Recycling? Admit it, it's all just rubbish".

It's the EU that tells Gordon Brown to increase the price of every ton (or is it a "tonne"?) of household rubbish dumped in landfill sites, she writes. Gordon Brown says OK, sure, why not? and promises to fine councils up to £150 per ton (or tonne) if they go over their EU-arranged landfill-site allowance. So we must, must, must recycle, d'you hear?

The EU, she observes, hates landfill. Woods lives in the countryside and likes landfill. She prefers it to incinerating rubbish, and well she might. The pictures in this piece are a collation of landfill practice, from lining the pit to spreading and in-situ compaction. The final picture shows the cell structures and the covering of the refuse with inert material.

It's modern, sanitary, environmentally friendly and produces large quantities of methane which is used to produce electricity, helping us meet our renewable energy quota. Furthermore, there is more than enough capacity in this country to meet any foreseeable need. But – courtesy of the EU - we must pay a ransom of over £3 billion for using the system.

No wonder the politicians don't want to talk about it.