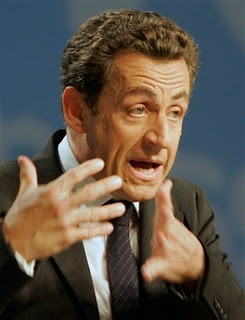 Even through the medium of the dry, printed word, you can sense a certain excitement in the demeanour of the "colleagues" as they absorb the results from the first round of the French presidential election.

That much comes over from an AP report, via The Hindu (don't ask), which retails how German foreign minister Frank-Walter Steinmeier was in a buoyant mood at yesterday's meeting of the foreign ministers of the EU member states in Luxembourg.

He welcomed the poor showing of the "far-right" leader Jean-Marie Le Pen, who finished a weak fourth with 10.5 percent of the vote. Chirped Steinmeier: "I'm quite satisfied that the more radical groups, like Le Pen, have fallen behind very clearly."

Unspoken is the relief that the presidential race is bedding down to a straight "right-left" contest which will deliver an establishment politician who can be house-trained in the ways of the Union.

The hope is, of course, that the coming of the new president will break the constitution deadlock and thus we get AP reporting that the "EU capitals" are waiting for a new French president and government to see what can be salvaged of the draft constitution that French and Dutch voters rejected in national referendums in 2005.

With Sarkozy in the lead and looking to be the outright winner, however, the "colleagues" may be in for a surprise. Our readers will recall the great man delivering his European agenda to a crowd in Strasbourg in February, where he announced that he would propose a new, simplified treaty that would scrap decision-making by unanimity and create the position of an EU president that would rotate every 2½ years.

That, we remarked at the time, would go right against the grain of Merkel's "treaty-lite" and would involve changes that would require the signing and ratification process to start all over again – a huge can of worms for the "colleagues".

Yet, even in his honeymoon period, Sarkozy will face a volatile nation and he displayed his awareness in Strasbourg that his fellow citizens were not entirely happy with the way the EU is going. With stresses building up as the euro increases in value and the unfinished business of Turkish enlargement, he is unlikely to take a victory as a mandate to climb further into bed with the "colleagues".

Having already stated that "Europe" was in a "serious, profound crisis", he could instead "do a de Gaulle" and attempt to re-assert French dominance over the EU – possibly in the name of "protecting the victims of globalisation."

The other possibility, of course, is that he could after all roll over and go all communautaire but, as my co-editor is always quick to remind us, Sarkozy is of Hungarian immigrant stock. And, as that old English proverb goes, there is many a slip twixt cup and revolving door.