All at sea in Strasbourg 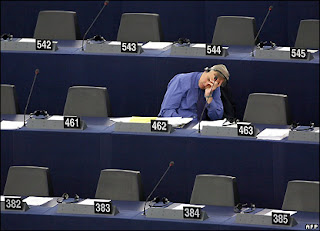 Probably only the Greens could get away with it, so we can enjoy their little swipe at the EU parliament, where they point out that the monthly pilgrimage from Brussels to Strasbourg is producing 20,000 tons of carbon dioxide a year.

This, apparently, is equivalent to the greenhouse gases produced by 13,000 round-trip flights from London to New York, and compares rather unfavourably with the 30,000 tons of carbon dioxide produced annually by the entire populations of the Pacific island nations of Kiribati and the Cook Islands.

The study, reported in the IHT, was carried out by professor John Whitelegg of the University of York, presumably for something less than the €200 million annually that is costs to run the white elephant in Strasbourg, which is used for 12 four-day sessions a year and stands empty for the rest of the time (barring security staff and cleaners).

Needless to say, even the prospect of the EU parliament being responsible for a rise in sea levels by a zillion feet is unlikely to have much impact on the French, whose baby this second seat is. Chirac made sure of that, by locking the requirement to use the building into the Nice Treaty and even that nice Mr Sarkozy is unlikely to risk the wrath of the otherwise agreeable Strasbourg restauranters by challenging the status quo.

So, while the MEPs huff and puff, be they green or a lighter shade of brown, they are still going to have to put up with the knackering journey to Strasbourg each month. The one consolation is that they can catch up on their sleep when they get there – dreaming, no doubt, of rising sea levels.