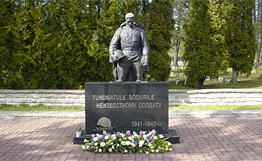 Could the story of the Bronze soldier and his peregrinations together with the Russian deliberate over-reaction be coming to an end? One can but hope, though, if past history is anything to go by, President Putin or his ministers will find some other excuse to try to stir up trouble in the former Soviet republics.

Both the BBC Russian Service and RIA News have reported that the statue would be open to visitors today in its new place. The latter is ahead of the Beeb with a photograph (it looks real) of the Bronze Soldier in the new position though the wall has not been reconstructed behind him. The official opening will be on May 8, VE Day or the eve of Victory Day, depending on where you are.

Meanwhile, the accusations have started flying back and forth. The Estonian Foreign Ministry has accused the Russian government of deliberately fomenting the protests in Tallinn and Narva and has protested against the continuing picketing of the Estonian embassy in Moscow, in the process preventing the Estonian ambassador from leaving the building.

The same news item on the BBC website tells us that the coffins of 12 Soviet soldiers have been found near to where the memorial had stood until this Friday.

Meanwhile the Russian parliamentary delegation has arrived in Tallinn. According to the Estonians discussions will centre around the scores of Russian citizens who were arrested during the riots and the one Russian citizen who has died of knife wounds.

The delegation seems to have a different view:

They also want the statue of the Bronze soldier at the centre of the row to be returned to the central Tallinn site from where it was removed last week, he added.

Since neither of these things are likely to happen, they might as well discuss what to do about the various Russians from Russia.

The EU has finally noticed that something is going on around its eastern border. Chancellor Merkel has spoken to President Putin about the Estonian problem among other matters and Ilkka Kanerva, the Finnish Foreign Minister has called for the maintenance of a joint line on the subject. Of course, that begs the question of what that joint line might be and, it would appear, that the attitude of the new intake, especially the Baltic States and Finland could be somewhat different from that of other member states. But that’s just attitude.

When it comes to the joint line, it seems to consist of a general agreement that this is a bilateral problem (aren’t they all?) and the EU need not interfere. So much for a common foreign policy though the German Foreign Minister is desperately warning about a renewed Cold War. Given what has been going on in the last few weeks and months, the words horses, bolting and stable doors spring to mind.

The oddest reaction came from Javier Solana, though this seems to have been reported only by RIA:

The EU's leading foreign policy and security official said Saturday he was concerned by the use of force against protesters following the removal of a WWII statue in Tallinn Friday.

Apparently, Solana confirmed that he did not think this was an EU issue but a bilateral one between Estonia and Russia (just as he thought Poland’s problems with Russia were no concern of his). The question is why Solana? If the story is true he was commenting on something that is not part of his portfolio. He deals with the EU’s foreign policy while the behaviour of the Estonian police is internal EU policy.

Is Solana making noises because this is, after all, a matter for the Common Foreign Policy Supremo, there being the problem of Russia interfering with the internal matters of an EU member state? If so, why not say so? Or, perhaps, he did but RIA did not report it. Then again, no-one else seems to have reported him either.