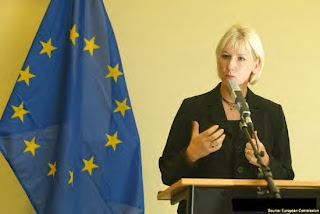 While little enough attention was paid to the Fluffy and Fragrant Commissar, Margot Wallström deciding to do a bit of moonlighting in Swedish politics, the latest posting on her blog has raised a few eyebrows.

The most notable pair of eyebrows belong to Joseph Daul MEP, Chairman of the EPP-ED Group (yes, yes, that is the one our own Conservative MEPs belong to). Of course, it is unlikely that M Daul was issuing a statement and lodging a complaint with Commission President Barroso out of pure faith in the importance of impartiality for Commissioners. He is, presumably, a Sarkozy supporter.

The odd thing is that, by her standards, the Fragrant Margot has not done anything too bad. In her latest posting she goes a bit mushy about Ségolène Royal (and a few other things).

First she tells us that she cheered for the political candidate belonging to her political family, which is almost acceptable, though as a European Commissioner she is not supposed to have a political family.

Then, launching into French, the fragrant Margot produces a paragraph of ra-ra-ing for the first female to get through to the second round of the French Presidential elections. She scrupulously notes that there have been several women politicians in Europe who had reached high position. (One wonders whether she would have cheered for Margaret Thatcher. Perhaps not. Female solidarity can go only so far.)

This, in itself, is not political interference but the matter is made worse by her posting a picture of la Royal on the blog, which comes close to endorsement. Whatever political family one belongs to and however anxious one is to see women advance in politics, Commissars are not supposed to get involved in national politics in any of the member states. On the other hand, there is nothing terribly new about them doing just that.

Is Nicolas Sarkozy likely to have any sleepless nights because his rival is being semi-endorsed by the most derided of all European Commissioners?