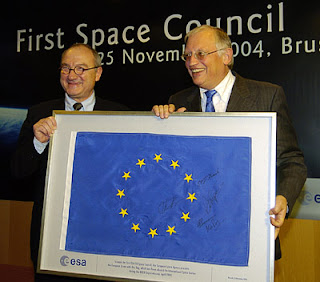 Remember the EU Space Policy? Inserted into the EU constitution at the last minute, at the insistence of Chirac, the "colleagues" wasted no time setting up their "Space Council", the first meeting of which was held on 25 November 2004 - even before the French and Dutch referendums.

Such was the hubris that, to mark the occasion, European Space Agency director general Jean-Jacques Dordain presented EU commissioner for enterprise and industry, Günter Verheugen with an EU flag, which was flown aboard the international space station during the Delta Soyuz mission in April 2004 (pictured).

Of course, the French and the Dutch did for the constitution and, you would think, that also ended the EU space policy. But not a bit of it. Only recently we learned that that EU seemed close to unveiling its definitive policy, with Germany aiming to launch it before its six-month term as EU president expired at the end of June.

The nearest parallel, perhaps, is the spoilt child in a supermarket, who takes sweeties off the display rack, only for the parent to return them, whence the child takes them again, and so on, until the parent eventually weakens and pays for them at the till. Like that spoilt child, the EU keeps coming back, and back and back… until it finally gets what it wants.

In an interesting development this week, however, the British National Space Centre (BNSC) signed a memorandum of understanding with NASA on space co-operation. Amongst the first projects to be considered is a collaborative lunar robotic explorer.

Commenting on the agreement, Dr Andrew Coates, a leading planetary scientist at University College London, says: "We would hope from this agreement that we would get to fly more instruments on more US missions - to the Moon, to Mars and beyond; as well as working with our usual partners within the European Space Agency."

BNSC receives most of its funding from the new Science and Technology Facilities Council and the council's chief executive officer, Professor Keith Mason, justifying the linkage, said: "We have unique expertise in small satellites and miniaturised instruments which could provide a low-cost lunar telecoms capability, whilst simultaneously deploying probes to the Moon's surface in order to characterise the surface and interior."

That, itself, may be so much moonshine. A leading US commentator on space issues told us that, while some of the partnership makes sense, the idea that the UK's space industry has "unique expertise" in small satellites and miniaturised instruments is "silly". There are plenty of US firms with the same expertise, Swales, Ball, Aeroastro, Orbital and General Dynamics to name a few, not to mention all the other countries with similar skills.

The real significance of this deal, he suspects, is that BNSC wants a separate line of communications with NASA. British investors, it seems, are getting nervous that, with the advent of an EU space policy, too much will be controlled by Brussels and have been calling for an arrangement where they would not have to depend on ESA for all activities beyond Earth orbit.

Not for the first time, therefore, the UK – while making all the right noises in the direction of the EU – seems to be hedging its bets behind the scenes.