The saga of the Bronze Soldier goes on 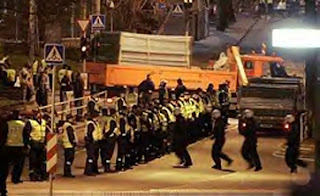 Not so long ago we wrote about the plan to move the Bronze Soldier in Tallinn, the memorial to the Soviet Liberators (or, as all these memorials are popularly known, to the Unknown Rapist). The plan seems to be to excavate the nearby grave of 14 Soviet soldiers (we do not know for certain that they are actually Russian) and to move them together with the memorial to a military cemetery.

This has upset the local Russian population and the big neighbour to the East, where Sergei Lavrov, the Foreign Minister and Mikhail Kamynin, the Foreign Ministry’s spokesman warned Estonia, no later than today that the dismantling of the monument, excavating of the graves and moving the whole lot will cause serious problems between that country and Russia. Russian newspapers have been writing continuously about the outrageous attitude of the Estonian authorities who are denigrating the great achievements and sacrifices of the Soviet army in the Second World War.

Even the Chief Rabbi of Russia has been roped in:

We know that extremist forces are raising their heads in some European countries, nursing plans to rehabilitate the Nazi ideology. We know that totalitarian regimes, among them the Ahmadinejad regime in Iran, have made the negation of Nazi crimes a central tenet of their propaganda.

One wonders how much of this Rabbi Berel Lazar believes. After all, it is his own government that has been particularly friendly and helpful towards the Ahmadinejad regime.

The problem of the Bronze Soldier illuminates the difficulty of assessing twentieth century history and, in particular, the events of the Second World War in the eastern half of Europe. The truth is that the two halves of the Continent had different experiences throughout the century.

To the Russians (and, let’s face it, some Balts and East Europeans) the various monuments to the Soviet soldier symbolizes the great sacrifices and achievements of the Great Patriotic War and the glory of the liberation the Red Army brought to various European countries. The truth is that the sacrifices were enormous and the achievement was astonishing. It is the liberation that has become problematic.

At the same time one cannot help feeling that some agreement could have been reached on the fate of the Estonian Bronze Soldier, if Putin and Lavrov did not see this as a wonderful opportunity to wind up Russian nationalism in Estonia and to play on that feeling of victimhood that is never far from the surface of Russian thinking. The Estonian authorities have emphasized over and over again that they do not intend to destroy the Soldier, merely move him.

Yesterday, the monument was covered with a huge tent, the square cordoned off and the border with Russia temporarily closed to prevent possible trouble. Work was due to start. Instead the police had to deal with about 1,000 demonstrators who screamed “fascists” at the Estonian police and refused to move, despite accounts in the Russian press of their determination to keep the demonstration peaceful.

The police used tear gas, water canons and stun grenades, eventually having to break the windows of cars in which the demonstrators locked themselves in. It is, as yet, not clear why it was necessary to use all this weaponry against 1,000 people.

Some of the crowd broke away and (accidentally, according to Izvestiya) broke the windows of the National Library, taking their revenge to other windows, shops and cars. Eventually, they were rounded up. One of the buildings targeted was the headquarters of the Reform Party.

There were several arrests and a number of people, including police officers, were hurt. Here is a video of some of the goings on, the general impression being of hooligan behaviour (as the Russians would put it). Interestingly enough those involved seem to be too young to care very much about what happened at the end of World War II.