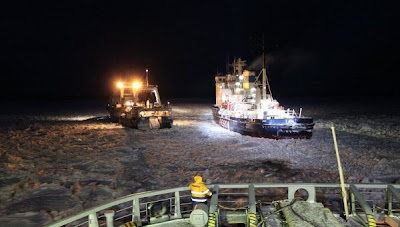 Instincts are proving sound on the Okhotsk Sea drama. After an ominous period of silence, we get a rush of reports, numerous but short – and not happy reading. One of these, at 11:41 Moscow time, informs us blandly that the Admiral Makarov has "cut its way to the ships stranded in the Sakhalin Gulf in the Sea of Okhotsk and is preparing to lead them out of the ice trap".

With more pictures now released of the rescue of the 1,3000-ton trawler, Mys Yelizavety (above and below), another report tells us that the Admiral Makarov was under three miles from the trapped ships. But, tucked in at the end was one terse sentence: "A third icebreaker is on its way ... ". 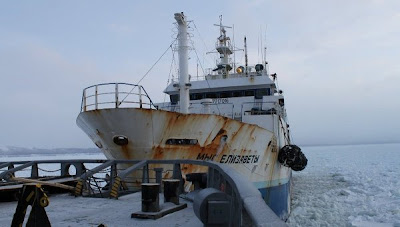 TASS provides more detail, giving the startling news that the Magadan has been left at the edge of the ice field "to perform, if necessary, the function of an auxiliary icebreaker". No explanation is given, but this gives some clue as to how bad the conditions must be.

Then comes yet another report which identifies the third icebreaker. This is the Krasin, sister ship to the Admiral Makarov (pictured below). She is heading for the area from the port of De Kastri in the Khabarovsk region. Even though this is on the southern edge of the Okhotsk Sea, she is not expected to arrive until 9 January, which also tends to confirm how bad conditions have become. 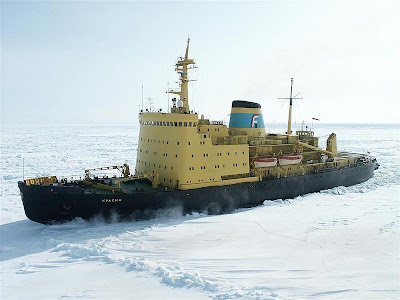 A Russian Transport Ministry press service official has told Itar-Tass, "In view of the heavy ice situation and for the purposes of ensuring the safety and a guaranteed release of the fishing boats from the ice-nip, the icebreaker Krasin set out from De Kastri port in the Tatar Strait late on Wednesday night in assistance to the icebreaker Admiral Makarov".

Finally, very latest report of this series emphasises, "Third icebreaker hurries to ice-trapped ships' rescue", which sets the seal on the story so far. They are in serious trouble here. It was always going to be difficult extracting the 32,000-ton Sodruzhetsvo, and the bland optimism we have been getting has always sounded unrealistic.

There is a very real chance here that things could go seriously belly-up, with the Sodruzhetsvo being sunk or seriously damaged. In the 1983 ice crisis, the Soviets lost a freighter and others were damaged. This could happen again.

And in the storm condition forecast, with high winds, blizzards and zero visibility, there is no guarantee that a helicopter rescue could be effected. If they could get these trapped ships out now, they would. That they are not doing so, and waiting for the Krasin says they can't. And that tells its own story.

Meanwhile, an unconfirmed report from the BBC Russian Service speaks of a trawler, Nimb trapped by ice in the Barents Sea, having transmitted a distress call.  More detail as and when (if) we get it.

Needless to say, reporting from western agencies continues to be dire, notably this AFP account which has promoted the third icebreaker to Admiral Krasin (which he never was) and has her ploughing "through howling storms to the rescue of hundreds of fishermen ... ".

UPDATE: The Admiral Makarov is reported to have reached the first of the remaining trapped ships, the smallest of the trio, the 2,500-ton Professor Kizivetter fisheries research vessel. She is being towed, "through a blinding winter storm" to ice-free waters. The plan, according to the Interfax news agency, is then to return for the other two ships. No timescale is being given, and one presumes that the Sodruzhetsvo will be left to last, when the Krasin might have arrived.