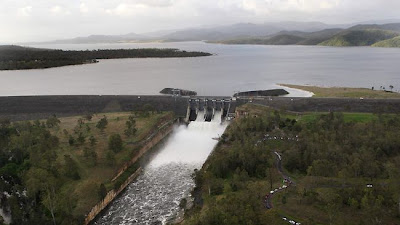 With the waters having peaked and now beginning to subside, and with the clean-up starting, there are now calls being made for a full-scale inquiry into the reasons for the Brisbane flood disaster. Initially, they have comes from the blog Regionalstates, which has been picked up and developed by Jo Nova, with significant input from her readers' comments – demonstrating yet again the value of a properly organised comments section (or forum).

The attention falls on the management of the largest dam in the region, the Wivenhoe dam (pictured above). This was built in 1984, as a direct response to the 1974 record flooding which inundated much of Brisbane. And, at the time, premier Joh Bjelke-Petersen said the dam would mean the floods of 1974 would never happen again.

The current claim is that the water authority mismanaged the water flows from the dam, waiting until after last weekend, when the dam was near overflowing, before releasing water – thereby adding to the natural peaks. By this means, the flood, which the dam was designed to prevent, was actually caused by the dam managers, which would make it a man-made disaster.

Regionalstates is asserting that controlled releases of water from the dam over the weekend, before the volume in the dam had peaked and when there was only low level flooding in Brisbane, could have avoided the situation later in the week. By then, with flooding at a higher level, the dam was at risk of overflowing, forcing a massive release which added to the peak flows at just the wrong time.

However, it is not just bloggers who are making the running. Brisbane Lord Mayor Campbell Newman wants a judicial-style inquiry into the flood disaster, and appears to be gunning for the state premier, Anna Bligh. She may well be in the frame, because the roots of this disaster could go back to last spring. Local pundit Cameron Reilly points to her insistence on maintaining water conservation measures, even though dams were then at peak storage capacity.

As Brendan O'Neil remarks, the obsession with global warming may well, therefore, have contributed to the floods. In particular, it may have influenced decisions on water levels maintained in dams and release policies. Better planning, suggests Reilly, might have allowed the water company to keep less reserves in the dams in the lead up to summer, which would have meant smaller releases during this current crisis.

Given that, despite all this, the actual peak of the Brisbane River scraped in just under the 1974 peak - surprising most of the experts, as the general consensus for the previous few days had been that it would exceed the 1974 peak – there do seem to be strong grounds for a full inquiry as to the causes of the disaster.