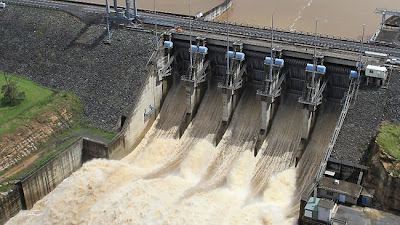 As a further illustration of quite how childish our newspapers have become, we can set the scene with a robust opinion piece in the Australian Sunday Herald Sun, addressing the continuing scandal of the Brisbane floods.

Exploring the role of management of the Wivenhoe Dam, under the heading: "Greens be dammed, we need protection," this piece notes that: "Eco-catastrophists always cite the precautionary principle: if they are right and we don't reduce CO2 emissions, we face Armageddon. If they are wrong, all it costs is dollars." It then goes on:


But when money is allocated and attention prioritised to making contingency plans for vague hypothetical scenarios in the distant future, real priorities are neglected and real risks overlooked.

When leaders proclaim climate change as the greatest moral challenge, the entire machinery of government becomes preoccupied with the busy work of solving an imaginary problem. It is then easily blindsided by a real emergency.

This all-too-human phenomenon of selective attention is depicted in the famous psychology experiment with a gorilla. Volunteers have to watch a video showing a group of people passing a ball and count the number of times the ball changes hands. Most people concentrate so hard on the ball they don't notice the big gorilla that walks through the middle of the screen.

We have been so busy fretting about carbon dioxide that we have neglected the real challenge - how to adapt and protect ourselves from natural disasters.

As important as the sentiment is the debate – the fact that there is one. And the issues being rehearsed are not just local to Queensland or even Australia. The piece explores tensions between rampant greenery and public protection which are manifest here and everywhere in the developed world.

Kick-starting that debate is what Booker tried to do last week in The Sunday Telegraph, while the main newspaper focused on stream of consciousness and human interest copy.

One might have thought, though, that with the dam management and the green involvement prominent in the Australian media, this week's newspaper might actually acknowledge the extent of the debate and the strength of feeling. But not a bit of it. They ignore it. We have instead more human interest as we are regaled with a half-page illustrated account of "the desperate attempts to save a family from the Queensland floods."

This retreat into childhood truly is disturbing. Never more so do we need these important issues debated and when the so-called "broadsheets" sell the pass, we really are in trouble.