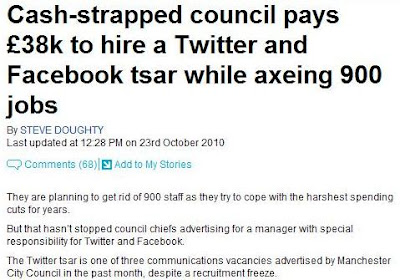 Anyone in local authority "service" who sets up this job, and anyone who takes it, deserves to die. They take money from us by force – or under the threat of force - and we go to jail if we do not pay.

When a local authority is already having problems and they cut essential public services to pay for this obscenity, people die. Thus, if you ever meet any local authority Twitter and Facebook tsars, don't mess about. Kill them. This is not murder - it's self defence. And there is not a jury in the land which would think otherwise.

* And before the stupid left wingers (is there any other sort?) and other numpties start sounding off, read the comments thread, and then look up the word "polemic" in the dictionary.