A crack in the façade 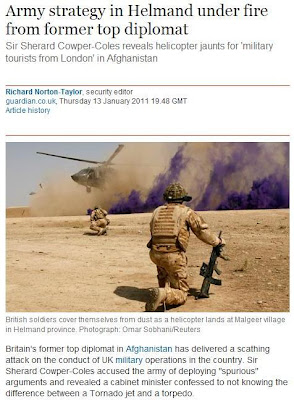 We do not stray too often into discussing Afghanistan these days. This is not for lack of interest – simply, our views are known and there are only so many times and so many ways you can write: "get out".

But it is worth noting a piece in The Guardian which records a "scathing attack" from Britain's "former top diplomat in Afghanistan" on the conduct of UK military operations in the country.

This is Sir Sherard Cowper-Coles, who has accused the army of deploying "spurious" arguments, claiming that the war in Afghanistan gave the army a raison d'être it had lacked for years, and "resources on an unprecedented scale".

What is especially interesting is that Cowper-Coles, in taking on the Army, is also attacking the Dannatt legend, arguing that the real reason for the enthusiasm for the adventure back in 2006 was that, "In the eyes of the army, Afghanistan has also given our forces the chance to redeem themselves ... " in the wake of its dire performance in southern Iraq.

As to our initial deployment in Afghanistan, Cowper-Coles argues that Army dispositions were then dictated not by military logic (such things as defeating the "enemy") but to proof the Army against future defence cuts. Dannatt, he says, had told him in 2007 that, if he did not use the battle groups coming free from Iraq in Afghanistan, he would lose them in a future defence review.

Strategy in Helmand was thus driven as much by the level of resources available to the army as by "an objective assessment of the needs of a proper counter-insurgency campaign in the province". What Cowper-Coles calls the "supply-side strategy" was reflected in the policy of rotating entire brigades through Helmand every six months.

Recalling that time, when the attacks on the then government were sharp, and the narrative very much favoured the military Cowper-Coles offers some insight into what was going on. Ministers, he says, were reluctant to question military advice for fear of leaks to the press suggesting they were not supportive of the troops.

This, of course, reflected the culture of leaks within the military and the MoD, when senior civil servants and the military were briefing against their own ministers, supported by media defence correspondents and by the Conservative Party, who were happy to use the disarray as a stick with which to beat the government.

Distortions were manifest, with the RAF producing a paper arguing for Tornado bombers to be sent to Afghanistan, even when NATO "... made clear that the one category of weapons system [it] did not need more of was ground-attack jets."

And he says, the military blamed ministers unfairly for shortages of equipment in Helmand. Cowper-Coles asserts: "I cannot help remembering an RAF movements officer in Helmand showing me a pie chart of British helicopter movements in southern Afghanistan ... 27 percent of the helicopter movements were for moving VIPs around theatre. And most of those VIPs were senior military tourists from London."

I have my own sources which suggest that much of what Cowper-Coles asserts can be relied upon, despite strong rebuttals from Dannatt via the BBC.

The grouse, if there is one, is that this former diplomat was not more assertive at the time, when ministers and their advisors were struggling to make sense of the Afghan campaign, which was being comprehensively mismanaged by the military, and especially the Army.

The lesson for now, however, is to go back to the time and recall how the narrative emphasised that ministers should rely on the military "experts" for advice, when the Brass were in fact playing their own political games which had nothing whatsoever to do with conducting an effective counter-insurgency campaign.

We should remind ourselves of the bullshit we were then getting from the military and the bien pensants, and how very few people there were who were suggesting that the strategy was about as effective as a bag of bent nails.

And this is only one crack in the façade. As time goes on, more and more will emerge. Gradually we will gain a clearer picture of recent campaigns which will eventually be regarded as examples of military incompetence on a heroic scale.